Indictment against Rasim Delic, former BH Army Commander of the Main Staff, unsealed. He is charged with murders, cruel treatment and rape committed by foreign fighters, so-called mujahedin that he failed to prevent or punish 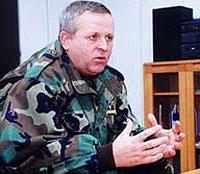 Rasim Delic
Rasim Delic, former BH Army Commander of the Main Staff, is charged in four counts of the indictment with murders, cruel treatment and rape, qualified as violations of laws and customs of war. In all four counts, Delic is charged on the basis of command responsibility: for failing to prevent or punish the crimes committed by the soldiers subordinate to him.

After Delic announced in Sarajevo yesterday that he would surrender to the Tribunal voluntarily next week, the indictment against him was unsealed today in The Hague. The first crime he is charged with was committed on 8 June 1993 – the same day when Delic took over as the Commander of the Main Staff of the BH Army. This is the infamous crime committed near the village of Maline in the Travnik municipality committed by the foreign fighters, so-called mujahedin. Enver Hadzihasanovic, former commander of the BH Army 3rd Corps and Amir Kubura, former commander of the 7th Muslim Brigade, are already on trial before the Tribunal for that crime. The mujahedin picked out between 35 and 40 people from a column of about 200 captured HVO soldiers and civilians escorted by the BH Army troops after a successful attack on Maline. They shot those people at the crossroads between the villages of Maline and Bikose. At least six people survived the shooting. Some of them have already testified at the Hadzihasanovic/Kubura trial and will probably appear before the Tribunal again to testify at Delic’s trial. As alleged in the indictment, he was informed about the crime, but failed to punish the perpetrators.

The other crimes Delic is charged with were committed, according to the indictment, between 21 July and 31 October 1995, as the war drew to a close. Again, they were committed by the foreign fighters. Members of the El Mujahid unit, established on 13 August 1993 on the orders of Rasim Delic and subordinated to the command of the BH Army 3rd Corps, captured several VRS soldiers in an attack on Krcevine in the Zavidovici municipality. They took the prisoners to the village of Livade where they promptly killed and decapitated two of them. They beat the others until the detainees were transferred to the Kamenica camp two days later. Another captured soldier was killed in the camp on 24 July 1995. His head was hung from a hook in the room where the prisoners were kept. They were forced to kiss the cut-off hand of the soldiers that had been killed. The prosecutor alleges that Delic received reports about this crime too, yet failed to take steps to prevent it or to punish the perpetrators.

Delic is furthermore charged with the murders, abuse and rapes committed by members of the El Mujahid unit in the Kamenica camp after the BH Army captured the VRS positions near Vozuca on the Ozren mountain. About 60 VRS soldiers were taken prisoners in the operation; so were three women, civilians, who happened to be in the village during the attack. The prisoners were taken to Kamenica, where women were subjected to sexual assaults and rapes before they were transferred to Zenica. The sixty captured soldiers disappeared without a trace in Kamenica and are considered dead.

After the fall of Vozuca, the indictment states, a group of ten VRS soldiers wandered through the woods, trying to reach Doboj. After 7 or 8 days, exhausted, they surrendered to BH Army troops. They took them to Kamenica. They stayed in the camp for 12 days. They were regularly subjected to severe beatings. They witnessed the abuse of an elderly Serb man, who was beaten, stripped naked and forced to drink water mixed with petrol. He died a few days later.

The prosecutor claims that Rasim Delic knew that the members of the El Mujahid unit had been active in Kamenica and that they had been prone to criminal activities, yet he failed to take reasonable steps to prevent the crimes in the camp.