Jadranko Prlic’s US attorney today stressed the fact that the BH Croats were the first to accept the Vance-Owen peace plan, drawing from it the conclusion that their policy was peaceful, unlike that of the “Muslim government” in Sarajevo. Ambassador Herbert Okun then reminded him of the English proverb, “actions speak louder than words” 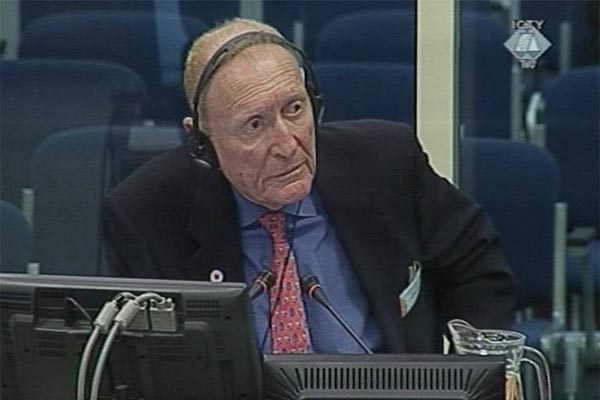 Herbert Okun, witness for the prosecution in the trial of the former Bosnian Croat leaders
According to the defense of six former Herceg Bosna leaders, Tudjman and Milosevic did not open negotiations aimed at changing the borders of Bosnia Herzegovina. The European countries did it in fact, following the breakup of the former Yugoslavia, as they searched for “a pragmatic peaceful solution” for BH. Michael Karnavas made this claim in the cross-examination of Ambassador Herbert Okun. Jadranko Prlic’s US defence counsel went on to clarify that “the European negotiators were aware that this could open up Pandora’s Box”.

Some foreign negotiators came up with “all kinds of ideas”, Okun said, but those ideas had to do with changing of the borders “between” the former Yugoslavian republics and never of the borders “inside” any of the republics.

Karnavas accused the witness that he had come to the courtroom “prepped” by the prosecution to say that Tudjman was Mate Boban’s superior. He asked Okun to find in his notebook “at least one entry” that could confirm it. Okun replied that these were “not claims but facts”, which he wrote down repeatedly in his notebook. “The reason why we went to talk to Tudjman was because he was the boss", Okun said.

Prlic’s defence counsel went on to say that the representatives of the Croatian people in BH had proved they were willing to cooperate when they signed the first Vance-Owen plan in early January 1993. Okun agreed, but added that what had been said and signed differed from the situation on the ground. The HVO’s peaceful policy, he said, went hand in hand with its policy of “ethnic cleansing” in Central Bosnia. Okun reminded Karnavas of an English proverb, “actions speak louder than words”.

Okun reminded the court that Ahmici and Stupni Do had happened after the signing of the agreement. This could be seen clearly on TV, unless, Okun said, “you [Karnavas] claim that those incidents were a media fabrication”.

In his cross-examination of Ambassador Okun, Karnavas argued that the government in Sarajevo defended only the Muslim interests in the course of negotiations. Okun agreed that “nobody was an angel in BH” and that Izetbegovic mostly represented the interests of the Muslim people. However, he believes it would be wrong to say that Izetbegovic did not consider the “well-being of others”.