Nelson Draper, Canadian warrant officer who investigated the Stupni Do massacre continued his evidence today. In the cross-examination, the defense denied that the accused were responsible for this crime and repeated the concerns over “the fairness of the procedure”. The prosecution raised the issue of the right of the accused to cross-examine witnesses 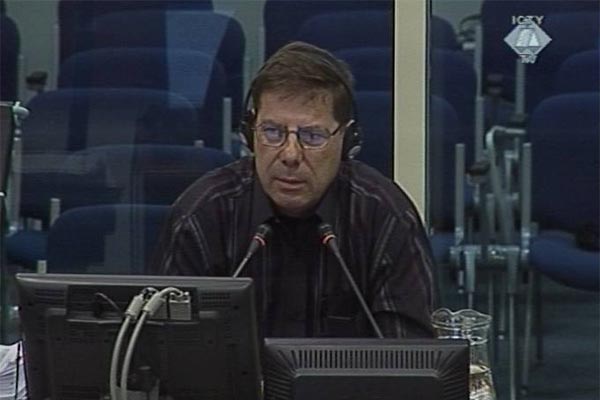 Nelson Draper, prosecution witness in the trial of the former Bosnian Croat leaders
The cross-examination of Nelson Draper, Canadian warrant officer who conducted the UNPROFOR investigation of the Stupni Do massacre on 23 October 1993, continued today amid defense’s concerns about the “fairness” of the trial of six former Herceg Bosna officials.

“There is only the plea agreement between Ivica Rajic and the Office of the Prosecutor,” Vesna Alaburic said. What Rajic confirmed or denied in this “agreement” was not relevant for the six former Bosnian Croat leaders charged with the same crime in the indictment, she contended.

Ivica Rajic a/k/a Viktor Andric pleaded guilty to the crimes in Stupni Do and was sentenced to 12 years in prison. The plea agreement he reached with the OTP bound him to “testify truthfully” in all other trials, if called to do so.

In the course of today’s hearing the prosecution raised the issue of the right of the accused to cross-examine prosecution witness. This gave the accused “a lot more” than the previous decisions issued by the Trial Chamber allowed them.

Prosecutor Kenneth Scott said that previous decisions granted the accused the right to cross-examine witnesses “only in exceptional circumstances”. Now the accused have the right to “stand up whenever they want, hold forth and present legal guidelines”. This applied particularly to the accused Slobodan Praljak, the prosecutor noted.

[IMAGE]2592[/IMAGE]After his defense counsel Bozidar Kovacic noted that the accused had the right to decide how to defend himself, Praljak made yet another speech. This time he spoke of right and justice. He also asked that in future this trial be called “comprehensive” and not “big” trial. If the trial is called “big”, he said, that “somehow implied that big criminals are on trial”.

Praljak asked the judges “in the name of truth” to interrupt his examination of witnesses whenever and however they wanted. This is a bit puzzling, because the whole debate about the “fairness of the trial” was instigated by the defense who objected to being interrupted by the judges asking questions.

The debate will continue next week when the other accused will have the chance to express their opinion about the course of trial to date.