BH PARTITION PLANS IN FORM OF A STAIN

As the trial of six former Herceg Bosna officials continues, former US diplomat Herbert Okun takes the stand. Okun was UN deputy special envoy to the Balkans in the early 1990s. One of the plans for the division of Bosnia Herzegovina envisaged a territory for the Bosnian Muslims that looked like a stain on a map 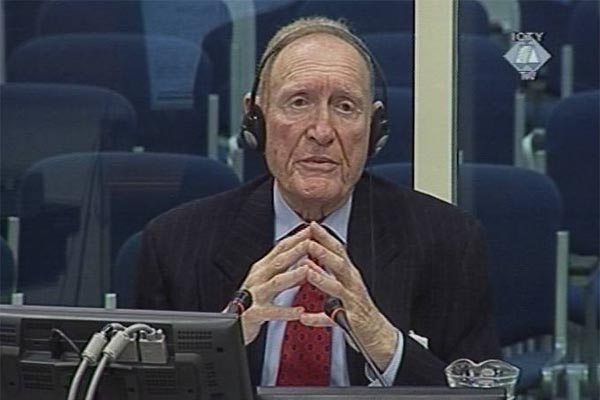 Herbert Okun, witness for the prosecution in the trial of the six former leaders of the Bosnian Croats
Herbert Okun, a US veteran diplomat testifies at the trial of former Bosnian Croat leaders. In the 1990s he was working on finding a peaceful settlement with the warring factions in the former Yugoslavia. He was the deputy of Cyrus Vance, UN special envoy to the Balkans. In this capacity, he attended a number of meetings where the division of Bosnia Herzegovina was discussed. Okun kept comprehensive notes from all those meetings; his notes were admitted into evidence as the prosecution exhibits.

As Okun described it, the aspirations of Croatia and Serbia for the annexation of parts of BH became evident after Tudjman and Milosevic met in Karadjordjevo in March 1991 and after the meeting of Mate Boban and Radovan Karadzic in May 1992 in Graz. Neither party kept secret their plans for the creation of separate states within Bosnia Herzegovina and their annexation to Serbia and Croatia at their subsequent meetings with international diplomats, Okun said.

Okun went on to say that the Croatian president Franjo Tudjman often attended the meetings where Bosnia and Herzegovina were discussed. Tudjman was not the "formal" head of delegation representing Croatian peoples' interests, Okun said, but de facto he was. Mate Boban, Bosnian Croat leader, would often agree with something, but would then add that he "had to check with Mr. Tudjman first", Okun said.

In his examination-in-chief, Okun drew on a map the lines for the division of Bosnia Herzegovina as proposed by Radovan Karadzic. They resembled a horseshoe. The only territory BH Muslims would have on this map, the witness said, was a little area, "like a stain on a map”, stretching from Sarajevo to Tuzla and Zenica.

The defense was opposed to Okun marking on the map the division lines as they were drawn by Radovan Karadzic in November 1992. As the accused Praljak noted, they correspond to the lines Franjo Tudjman drew for Paddy Ashdown on a paper napkin during a formal dinner in London on 9 May 1995. Because he knew about that too, Ambassador Okun wanted to draw this map as well, but the judges did not allow it, saying it was "not relevant for this case".