As Bill Clinton was being sworn in at the beginning of his second term in office on 20 January 1993, US diplomat Herbert Okun was in Geneva, in the middle of negotiations about the Vance-Owen plan. He wrote down in his notebook “Clinton, be smart” 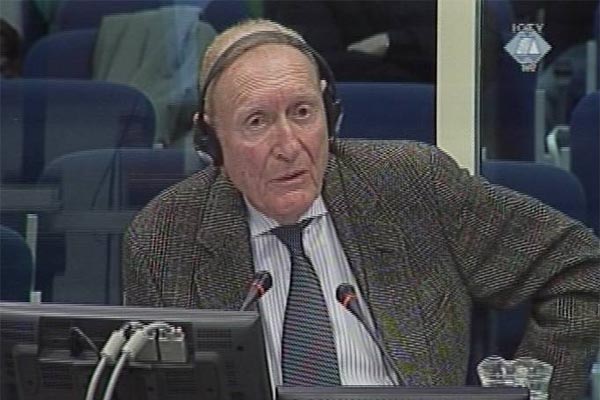 Herbert Okun, witness for the prosecution in the trial od the six former Bosnian Croat leaders
The Vance-Owen peace plan for BH had never been fully agreed on Former US diplomat Herbert Okun said at the trial of the former Herceg Bosna leaders. Okun was the deputy of the UN special envoy to the Balkans. In this capacity, he took part in the negotiations in Geneva in early 1993.

Vance and Owen introduced the peace plan to the warring factions in BH in early January 1993. At first, Croats were the most eager to accept it: as Okun explained, this was because it was in their favor. They were delighted, he said, with the “generous” division. A map was presented in court showing that the Croats were offered a territory whose borders were “almost identical” to the 1939 Banovina borders.

In the course of the negotiations, Bosnian Serb representatives Karadzic, Koljevic and Krajisnik made the most demands, Okun said. At the same time, they were inflicting the worst damage on the ground. The Muslims “hung there by the skin of their teeth and hoped for a good solution”.

The prosecution tendered into evidence a series of documents pertaining to the decision of the accused Jadranko Prlic from January 1993 ordering the subordination of BH Army units to the HVO in the three “Croatian provinces” envisaged in the Vance-Owen peace plan. In the order, Prlic refers to the Vance-Owen peace plan that was, as he claimed, signed on 15 January 1993.

Okun explained that Prlic’s claim was basically “incorrect” because the Serbs had not accepted the peace plan. Even if they had done so, what the HVO did was illegal and there was nothing in the plan that would support the HVO claim. This was a unilateral and illegal decision on the part of the HVO that violated the spirit and the letter of the Vance-Owen plan, Okun concluded.

In order to save time, the prosecution did not call any evidence on similar orders signed by Petkovic and Stojic, two other accused in this case, in mid-March 1993. The witness did agree with the prosecution that such an “interpretation” of the peace plan on the part of Croatian people had only caused new conflicts on the ground.

Describing the heated atmosphere during the Geneva negotiations – Izetbegovic, Karadzic and Boban participated – Okun said that on 20 January 1993, as the US president-elect Bill Clinton was being sworn in, he wrote in his notebook in Russian “Clinton, be smart”.

The Vance-Owen plan eventually collapsed in early May 1993 after all three parties signed the revised agreement, but the Bosnian Serb Assembly then refused to ratify it. The defense counsels of the six accused Herceg Bosna officials will cross-examine Okun tomorrow.