PRALJAK: TUDJMAN WAS A FOOL

American diplomat Herbert Okun found himself in a curious situation at the trial of former Bosnian Croat leaders: he had to defend the late Croatian president after the accused Slobodan Praljak called Tudjman a “fool” and a “sly man” 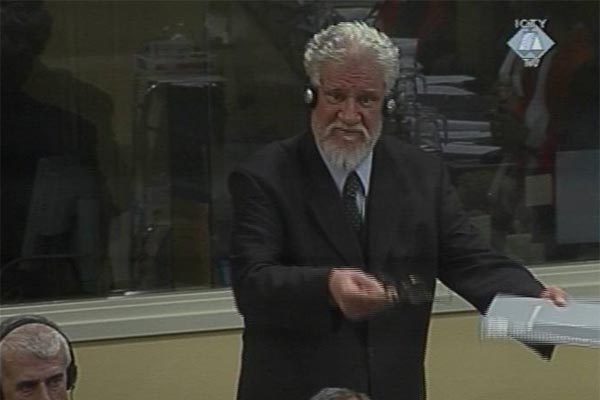 Slobodan Praljak in the courtroom
American diplomat Herbert Okun was cross-examined today by the defense of the former Bosnian Croat leaders. He found himself in a situation where he had to defend the late Croatian president Franjo Tudjman after the accused Slobodan Praljak called him “a fool”.

In an effort to prove that Croatia had no aspirations towards BH territory, Praljak asked the American diplomat how it was possible for “a little Franjo Tudjman”, a “fool”, as he said, to first recognize BH because the great USA recognized it, and then to continue to hope, “sly as he was”, that he would be able “to tear off a chunk of it”.

After Okun replied that he “held Tudjman in very high esteem” and that he could not see why anyone would call him a fool, Praljak showered epithets such as “erudite”, “brave” and “passionate” on the late Croatian president. He then went on to explain that he wanted to say it was “foolish” to even think that Tudjman had a contradictory policy towards BH.

The American diplomat then answered that it was quite possible for Tudjman to officially recognize BH and yet not to honor its territorial integrity.

As the examination continued, Praljak claimed that Alija Izetbegovic had in fact offered Tudjman the secession of Herzegovina and its annexation to Croatia, but that Tudjman had rejected the offer. He referred to an interview with UN special envoy Jacques Klein who stated at one point that Tudjman had personally told him something like that.

Okun rejected the claims, saying that it was his impression that Izetbegovic wanted to preserve the territorial integrity of BH. Contrary to Praljak’s claims, Okun said, Izetbegovic stuck by his fixation, as Okun called it.

Until the very end of the cross-examination Okun stuck by what he had written in his notebook during the negotiations: one of the key war goals of the Bosnian Croats was to establish a separate entity in BH which would then at one point be annexed, “formally or informally” to Croatia. He stuck by his previous statements that Tudjman had made it known to everyone at the negotiating table that those goals had his full support.