Three days after the massacre in Stupni Do, an UNPROFOR investigation team entered the village. The reek of burned human flesh could still be felt in the air, a smell like no other. Former Canadian warrant officer was the team leader. Now he is giving evidence in court, corroborated by video tape recordings and on-site photographs 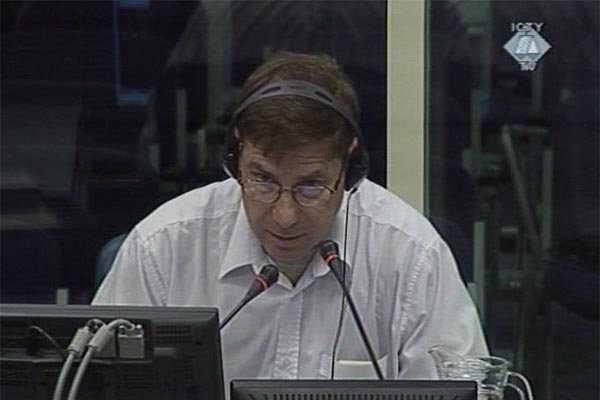 Nelson Draper, prosecution witness in the trial of the former Bosnian Croat leaders
Nelson Draper from Canada took the stand today at the trial of former Herceg Bosna officials. Draper conducted the UNPROFOR investigation into the massacre of Muslim civilians in Stupni Do near Vares. The massacre was committed when the HVO attacked the village on 23 October 1993.

Draper and his investigation team entered Stupni Do three days after the attack. The village was razed to the ground, he said. There was evidence of fire everywhere. Dead animals, grenades and spent shells littered the ground. The air still bore that “peculiar smell of burned human flesh”.

The UNPROFOR investigation team found 16 bodies on seven crime scenes in Stupni Do. Some of them had been burned completely. Among them there was a body of a child, 5 or 6 years old. Twenty two bodies were found after a subsequent investigation conducted by the BH Army, hidden under the rubble and at other locations in the village. The witness was not able to specify those locations.

The prosecution used video tapes and on-site photographs taken during the on-site investigation to corroborate the witness’ evidence. A segment of a BBC report was played, and the court saw photographs of the post mortem examination conducted a few days later by local doctors in Visoko.

After the crime scene work was over, the witness continued the investigation, interviewing about fifty witnesses. These interviews were also videotaped. All his attempts to talk to some of the participants in the attack on Stupni Do were in vain. At one point, not long after the crime, he learned that Ivica Rajic, commander of the HVO unit that had attacked the village, had changed his name to Viktor Andric. Rajic pleaded guilty to the Stupni Do attack before the Tribunal and was sentenced to 12 years.

In the cross-examination, the defense asked the witness to indicate on the photos the location of “the alleged rubble” where 22 more bodies were found at a later stage; there “really was no rubble”, the accused Praljak said. Praljak’s attorney Bozidar Kovacevic drew the court’s attention to lack of forensic evidence. The witness agreed and said that he believed some bodies had been burned in order to eliminate forensic evidence.

Interestingly enough, Presiding Judge Antonetti said that he had looked carefully at the photos but “didn’t see any evidence of fire” near the charred bodies. “Logic dictates” that there had to be some. Would that not mean that the bodies had been brought there after being burned somewhere else, the judge asked.