Ferida Likic testifies at the trial of six former Herceg Bosna officials. After describing how the HVO soldiers killed her husband, she went on to describe how she managed to escape from a house already on fire. She was forced into the house together with twelve other women and children on 23 October 1993 in Stupni Do 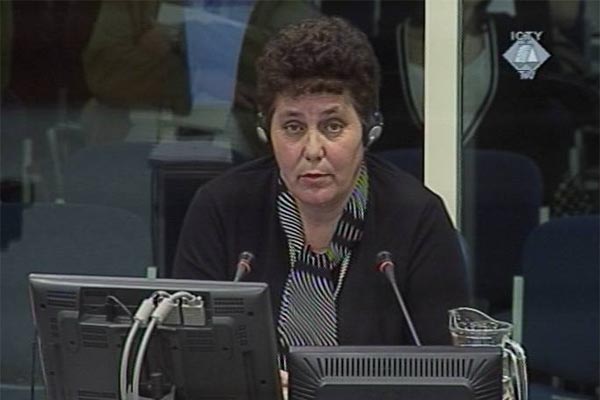 When the HVO attack on the village began, Ferida and Mehmed Likic took shelter in a basement near their house together with their children and neighbors. Soon after, they heard footsteps, curses and calls for surrender on the upper floor. As the witness recounted, about twenty to forty soldiers separated men from women and started looting, shooting and killing people. One of her neighbors tried to stop the blood gushing from his cut throat with his hands, but the soldiers finished him off, shooting him in the body and head.

Mehmed and Ferida Likic stood together when a HVO soldier approached them. He first asked Mehmed for money and then ordered him to lie face down. Before Mehmed lay down “to be killed”, the witness said, he looked at her “and his eyes were begging for help”. “There was no help,” she said. The trial was adjourned for a time when the witness burst into tears.

When she continued her testimony, Ferida Likic described the killing of a woman who was trying to protect her son. She witnessed the incident. When her turn came, one of the soldiers with a walkie-talkie in his hand said, “there will be no more killing”. When another soldier objected saying that “everybody, even the babies in their mothers’ wombs should be killed”, the soldier with the walkie-talkie “calmed him down”, telling him that “everybody will be set on fire”.

Ferida Likic was then locked up in a house together with twelve women and children. “A man with blood-shot eyes” proceeded to set it on fire. Thinking it would be better to die from a bullet than to burn, the witness managed to break down the door and escape. She ran to a forest nearby. On her way, she saw charred corpses. The post mortem report shown to the witness by the prosecution stated that one of the charred bodies was her husband.

The witness spent two day in the forest together with other survivors. They had no food and they decided to surrender to the HVO at a checkpoint. UNPROFOR soldiers arrived after a while and gave them milk and bread and separated them from soldiers at gunpoint. The witness heard the negotiations between UNPROFOR and the HVO and learned that Ivica Rajic was in charge of these soldiers. Ivica Rajic had in fact led the HVO attacks on Stupni Do and pleaded guilty to this crime before the Tribunal. He was sentenced to 12 years in prison.