Captain Hansen came to The Hague to clarify his report, where he had stated that the Sarajevo TV building had been hit by a missile fired from the BH Army controlled territory. Yet he was not of much assistance to the Trial Chamber, as he had neither seen nor heard the projectile being fired. In fact, he based his report on “second-hand” information 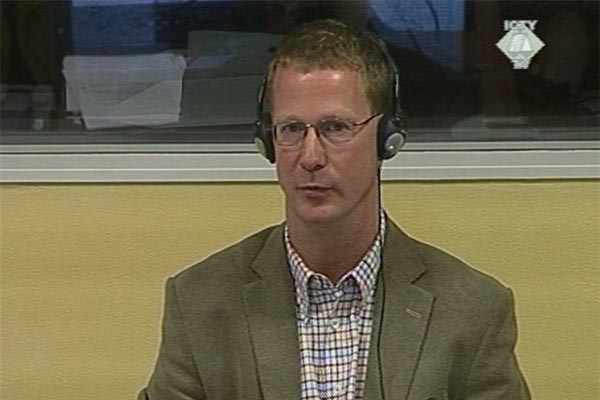 Thomas Hansen, witness in the Dragomir Milosevic trial
The Trial Chamber trying General Dragomir Milosevic issued an order for the testimony of Danish captain Thomas Hansen. He was supposed to clarify some claims in his report of 28 June 1995. He was the operations officer in the UN military observers’ headquarters. His report alleges that the projectile that hit Sarajevo TV building that day was fired from the territory controlled by the BH Army.

Hansen based his report on the information he got from the military observer who saw the projectile that morning from the TV building parking lot. The observer saw "a projectile flying low above the parking lot and hitting the TV building". According to him, the projectile had come from the territory controlled by the BH Army. Hansen is not positive about this observer’s identity, but thinks he might be "Captain Idriz from Kenya". Captain Idriz did not write the report himself because he thought this was a very sensitive issue that might "have serious consequences for the situation in Sarajevo"

Soon after he sent the report to the UN military observers’ headquarters in Zagreb, Hansen received a phone call from "somebody from Zagreb ". He cannot remember this person's name, rank or function but believes the man was his superior. This "somebody" told him curtly to "forget about the report" he just sent to Zagreb. Some 20 minutes later, the same person called again and said "the matter was resolved". The Trial Chamber insisted on getting the details of this conversation, but Hansen could not be more specific.

The defense has often used Hansen’s report in the trial to challenge the allegation that the accused Sarajevo-Romanija Corps commander is responsible for the shelling of TV building. General Milosevic's defense counsel has continued to do so even after the prosecutor presented the Sarajevo-Romanija Corps document dated 30 June 1995. In this document, General Milosevic relays Ratko Mladic's congratulations to Serbian gunners on their "accurate response to the Muslim attacks" and in particular on the direct hit at the Sarajevo TV building. The document describes the Sarajevo TV as "the centre of media lies about the just struggle of the Serbian people".

After Hansen, the prosecution called a witness who testified as Witness 95 with image distortion as a protective measure. She talked about the shelling of the Bunicki Potok Street in which 13 persons were injured. She herself was wounded in the shoulder. According to the indictment, the shell was fired from Ilidza. The witness testified from Sarajevo via a video link.