‘PLACES OF EVIL’ IN SARAJEVO

A Sarajevo forensic technician testifies about the on-site investigations he conducted after the explosions of modified air bombs on several locations in Sarajevo in 1994 and 1995. The scenes and damage at the explosion sites reminded him of ‘places of evil" 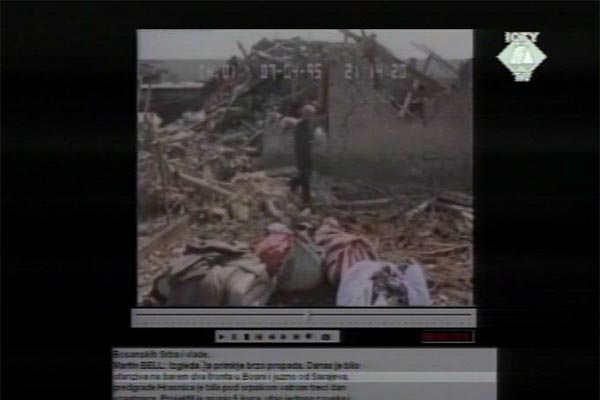 Picture of the destruction caused by the shelling of Sarajevo
A forensic technician from the Sarajevo Security Services Centre took the stand at the trial of General Dragomir Milosevic. He is testifying under the pseudonym 166. In 1994 and 1995, he conducted the on-site investigations at several locations after the shelling incidents listed in the indictment against former Sarajevo-Romanija Corps commander. In most cases, the explosions were caused by modified air bombs. There were only civilian casualties, according to the witnesses.

Among the sites the witness visited, sketched and photographed were the house in Hrasnica hit on 7 April 1995, the house on 43 Safet Zajko Street, hit on 24 May 1995 and the transformer station in Majdanska Street hit the same day and The Square of International Friendship that was hit on 16 June 1995. The witness claims that, according to the official reports on these investigations, modified air bombs were launched from the territory controlled by the Sarajevo-Romanija Corps.

In the cross examination, Dragomir Milosevic’s defense counsel pointed to the mistakes and omissions in the investigation reports and wanted to establish the criteria according to which the witness determined the type of damage to buildings, the direction from which air bombs had come and the civilian or military status of victims. In his reply, the witness said that in most cases he would obtain the information related to the direction from which a projective had been fired from the police officers who would themselves ask the eyewitnesses at the crime scene. “It was not my job to determine whether the victims were civilian or military”, the witness said, adding that he was sure that the air bombs caused “damage I had not seen before”. “When you look at such a scene, it is clear that you were in a place of evil”, the witness said.

The witness dismissed the usual hypotheses the defense puts forward in the cross-examination about “phony reports” with data being entered later, about military targets “missed by accident”, and planted explosive devices. In his view, these were “the arguments put forward by the aggressor”. He went on to say that “it would be naïve to think that the people would continuously shell themselves for four years”. Sarajevo was hit by about 2,000,000 missiles in those four years.

Modified air bombs will be discussed tomorrow when the prosecution calls its next witness, who is an expert for this type of projectile.