JUDGES DISTANCE THEMSELVES FROM THEIR PRESIDING JUDGE

After Judge Antonetti's comments last week that “90 to 95 percent of the judges’ questions favor the defense”, the two other members of the Trial Chamber distanced themselves from the presiding judge. The prosecutor for his part said that he was so embarrassed when he heard the remark that he wanted “to disappear“from the courtroom 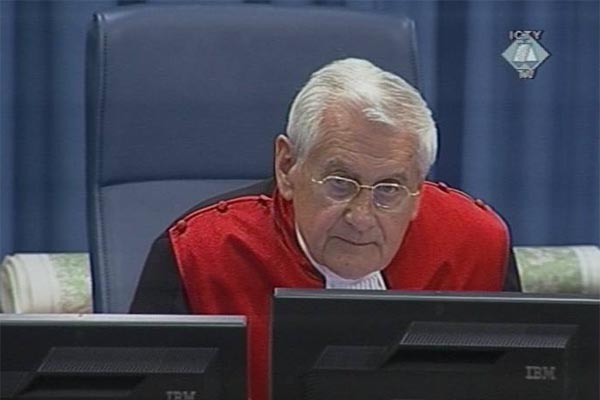 Arpad Prandler, judge at the Tribunal
French judge Jean-Claude Antonetti, the presiding judge in the trial of six former Herceg Bosna officials, made a rather peculiar response last week when the defense’ protested against the frequent interference of the Chamber in the questioning of witnesses. This had prompted the defense to call on the judge to “consider his own disqualification”.

At the beginning of the hearing today, Hungarian judge Arpad Prandler distanced himself from this statement, and Stefan Trechsel, his colleague from Switzerland, joined in in the opposition against the statement made by the presiding judge. Prandler said that the judges did not keep a record of the percentage of the questions they asked and the answers they got. As far as he and his colleague Trechsel are concerned, the questions are not biased to favor any party. The key task of the Trial Chamber was to ensure a fair trial, Prandler noted.

[IMAGE]2327[/IMAGE]After hearing them, Judge Antonetti said that it was “an error in interpretation” and his “lapsus linguae”. What he really meant was that “the replies given by witnesses to judges’ questions often supported the defense case”.

The issue of “fairness” deeply upset prosecutor Kenneth Scott. He sat in court with his head down last week, he said. He was so embarrassed by Judge Antonetti’s remarks that he wanted to “disappear” from the courtroom.

[IMAGE]2027[/IMAGE]“If anyone on the Trial Chamber wants to present the defense case, prosecutor Scott said, “he should step down and sit next to the defense”. Emphasizing the fact that both victims and the international community he represented before the Tribunal “have an equal right to a fair trial as the accused”, Scott said that judges couldn’t judge, accuse and defend at the same time.

The prosecutor said he often thought it would be good if the six accused could face six victims sitting in the courtroom, entitled to question them. Slobodan Praljak objected, saying that for him everybody was innocent until proven guilty in a final judgment. As Praljak launched into a lengthy reflection on justice – different for him and for the prosecutor, as he said – he was interrupted by Judge Trechsel. The accused have the right to question witnesses but in situations such as this, the judge said, only their defense counsel may speak.

The trial of six former Herceg Bosna officials continued then with the testimony of Salem Ceranic from the municipality of Vares.