Vahid Karavelic, who commanded the 1st Corps of the BH Army during the war, took the stand today at the trial of Dragomir Milosevic. Former VRS Sarajevo-Romanija Corps is on trial for the shelling and sniper campaign targeting Sarajevo civilians from August 1994 to the end of war 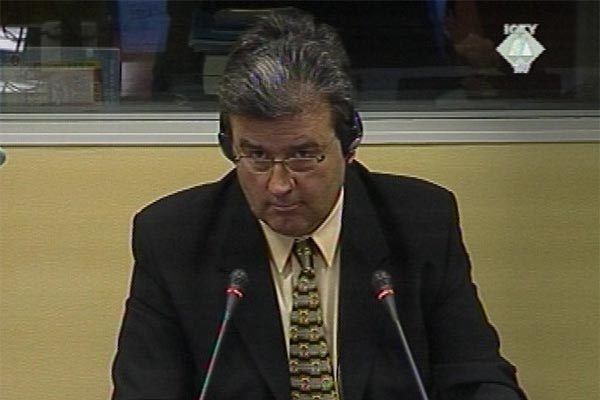 Vahid Karavelic, witness in the Dragomir Milosevic trial
General Dragomir Milosevic and General Vahid Karavelic met today in an ICTY courtroom. During the siege of Sarajevo, they could see each other only across the sights. The prosecution called general Karavelic, who commanded the BH Army 1st Corps which had been deployed in the Sarajevo theatre, to give evidence at the trial of General Milosevic, former VRS Sarajevo-Romanija Corps commander.

The statements that General Karavelic gave to the OTP investigators were admitted into evidence together with the transcripts of evidence he gave previously, at the trials of Stanislav Galic and Enver Hadzihasanovic. Prosecutor Carolyn Edgerton asked the witness to mark the front lines on the war maps and to indicate the sniper nests and artillery positions used by the Sarajevo-Romanija Corps.

Karavelic identified the key sniper positions held by the Sarajevo-Romanija Corps: on Debeli Brijeg, Spicasta Stijena, on the four Grbavica skyscrapers and on some other sites. The civilians in Sarajevo were targeted from those positions throughout the war. Many were killed or wounded and many more terrorized. He added that “special units from other places were often brought there; they were heavily armed, equipped and trained”. In General Karavelic’s view, although these units were not a regular part of the Sarajevo-Romanija Corps, “they had to be part of its chain of command”.

The witness was then showed a map with the SRK operations plan and he marked the four key artillery positions around Sarajevo: Hresa and Borije to the east, Blagovac on the north, Paljevo to the west and Toplik to the south.

The prosecutor then showed a map for Lukavica 95, a military operation carried out by the Sarajevo-Romanija Corps. The operation had been authorized by Ratko Mladic, Chief of Main Staff, and the map itself had been signed by the accused Milosevic. The prosecutor drew the court’s attention to the legend on the map, showing the respective strength of the SRK and the BH Army 1st Corps in personnel, arms and ammunition. Item 10 specifies that the SRK has two modified air bomb launchers and that the enemy side- the BH Army 1st Corps – does not have any launchers at its disposal. Karavelic gave credit to the planners from the opposite side. “Their assessment was right,” he said, “we didn’t have any air bomb launchers”.

Defense counsel Tapuskovic began his cross-examination by announcing he would “stick strictly” to the time frame relevant for the indictment – between August 1994 and November 1995, but then went on to ask Karavelic about his military service in the JNA in 1991, the attacks of the Slovenian Territorial Defense and the witness’s joining the Patriot league in early 1992.