FROM BEFORE CHRIST TO RATKO MLADIC

In the cross-examination of American historian Robert Donia, the defense for Dragomir Milosevic, former Sarajevo-Romanija Corps commander, covered all the arguments about the universal hatred towards the Serbs, from the time before Christ to the war in Sarajevo. Defense counsel Tapuskovic once again quoted the fugitive general Ratko Mladic 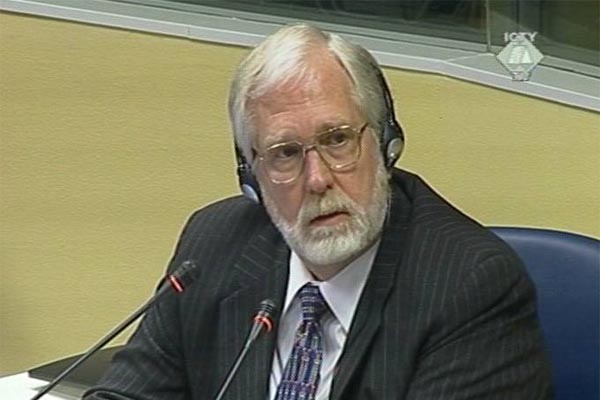 Robert Donia, witness at the Milomir Stakic trial
Branislav Tapuskovic, Dragomir Milosevic’s defense counsel, cross-examined American historian Robert Donia today. “There would have been no war and everybody would have lived in peace had there been democracy in the communist Yugoslavia” he said. This is the thirteenth time that Robert Donia has taken the stand before the ICTY as a “witness for justice”.

The prosecution admitted into evidence Professor Donia’s expert report on the historical facts related to the indictment against General Milosevic without the usual additional questions in the courtroom. In his cross-examination, Tapuskovic covered every argument about the universal hatred towards the Serbs throughout the history, from the time “before Christ” to the war in Sarajevo, despite frequent warnings from the bench to get to the modern era as soon as possible.

Among other things, Tapuskovic presented the old argument favored by Vojislav Seselj that “all Muslim in Bosnia are in fact Serb converts”. Professor Donia attempted to explain some claims he made in his report, saying that during the Ottoman empire “mainly Catholics and followers of the Bosnian church converted to Islam”. Tapuskovic then exclaimed “Very well, then, let them be Croats”.

After he had covered the coming of the Slavic tribes to the Balkan area from the Carpathian mountains, Tapuskovic did get to the “modern era” by quoting the fugitive general Ratko Mladic. On one occasion, Mladic said in the Bosnian Serb Assembly that “men and nations are neither pebbles nor keys” to be “moved here and there”. At that time, Mladic advocated the acceptance of “the kind of sense” that would mean not going to war against the Muslim and the Croats but “against those who made those peoples attack” the Serbs, Tapuskovic clarified.

When presiding judge Patrick Robinson asked him where he was going with this line of questioning, Tapuskovic replied that Mladic was General Milosevic’s superior. General Milosevic “respected the view of his commander who did not want to go to war against any of the peoples in BH”.

After hearing the evidence of the American historian, the trial of General Milosevic will be adjourned for one week.