Luka Dragicevic came to The Hague as a prosecution witness but in his testimony he corroborated General Dragomir Milosevic’s defense case. Saying that “there was no such thing as a siege” he added that the Sarajevo-Romanija Corps had in fact been encircled by the BH Army. The Sarajevo-Romanija Corps had to respond to the provocations and ceasefire violations by the BH Army, which enjoyed UNPROFOR protection 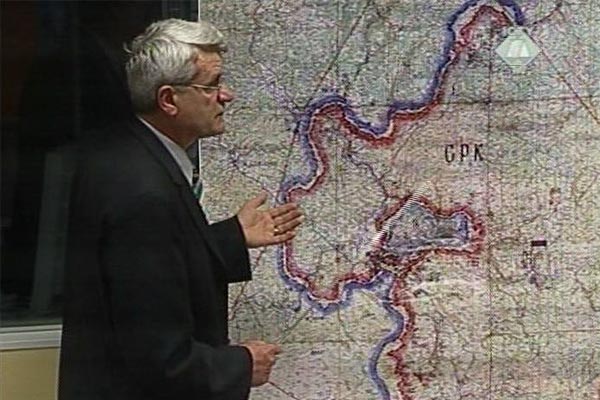 Luka Dragicevic, witness in the Dragomir Milosevic trial
Colonel Luka Dragicevic was General Milosevic’s assistant for morale, religious and legal affairs. He felt that it would be “morally proper to testify in favor” of General Dragomir Milosevic. Yet, he was subpoenaed to come to The Hague and give evidence as a prosecution witness on how the Republika Srpska Army implemented the provisions of international law and the obligation of a commander to prevent crimes and punish the perpetrators.

As he replied to the questions General Milosevic’s defense asked him, Dragicevic seized the opportunity to testify in favor of his former commander. First he described him as “a professional of the highest order, a man of exceptional moral fiber and a commander who knew that victories were won on battlefield and not in offices”. Then, he confirmed the defense’s argument that the VRS had done nothing but respond to the BH Army’s attacks. The BH Army, Milosevic’s defense counsel noted, provoked the VRS, violated cease-fire agreements and enjoyed UNPROFOR’s protection.

In order to get the witness to corroborate the argument that the Sarajevo-Romanija Corps engaged only in defensive actions, the defense counsel showed him a number of reports about BH Army’s military operations and ceasefire violations. The reports selected by the defense counsel in most cases cover the dates of the incidents listed in the indictment.

Using the map of broader Sarajevo, Dragicevic demonstrated how, in his opinion which happened to tally with the defense’s arguments, “the SRK was in a much worse situation than the BH Army”. He said that “from the operational point of view, the SRK’s position was untenable”. It was encircled by the BH Army. It was “bringing in the weapons to Sarajevo through the tunnel they had dug out below Dobrinja”, a part of Sarajevo.

In the re-examination, the prosecution challenged the witness’s claim about the superiority of the BH Army. The witness admitted that the offensive the BH Army launched in spring 1995 had been stopped “despite its military superiority”. The VRS “accomplished its task fully”, he added. The re-examination will be finished tomorrow afternoon.