HOW TO TELL WHEN A PERSON IS DEAD?

Dragomir Milosevic’s defense counsel claims that the former UN military observer in Sarajevo lacks medical expertise to tell when “a person is dead”. A 120mm mortar shell “could not have killed so many people”, he says, and it did not come from the territory controlled by the Sarajevo-Romanija Corps. The witness begs to differ 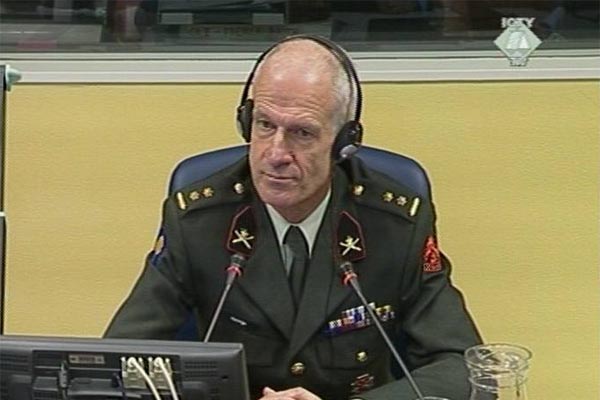 Harry Konings, witness in the Dragomir Milosevic trial
In his cross-examination of Dutch lieutenant colonel Harry Konings, Dragomir Milosevic’s defense counsel Branislav Tapuskovic is continuously trying to prove that the Markale 2 incident on 28 August 1995 was “staged” and that the bodies of the victims had been brought in from other places. On that day, Konings was the leader of the UN military observer team that conducted the on-site investigation of the massacre.

In response to Judge Robinson’s question during examination-in-chief, the witness said that after the on-site investigation, he had gone to the morgue. He saw “fresh” bodies there. The defense counsel thinks that the witness lacks “medical expertise” to know “how long it takes for a person to lose all blood” and to determine “when a person is dead”. Konings confirmed he had only basic military medical knowledge, adding that he had spent some fifteen minutes to get “a general impression”. His team did not examine the victims’ bodies, he said.

To explain his staged incident argument, the defense counsel again referred to General Nikolai’s evidence: he said he “would not rule out this possibility if it had been in the military and political interest of BH”. He also quoted General Rupert Smith who said last week that “it is not impossible”. Tapuskovic did not end the quote: the former UNPROFOR commander in BH said that he “never saw any proof to support those allegations”.

Konings did not agree with the other argument the defense counsel put to him, that a single 120mm shell could not have “killed so many people”. He said that the shell hit the main street in Sarajevo. It was crowded that morning. The shell exploded into thousands of fragments. According to the witness, the impact “could have achieved precisely those consequences”: the killing of 43 and wounding of 75 people.

Tapuskovic also challenged the claim that the shell had been fired from the VRS-controlled territory. According to the defense counsel, only the Bosnian police team reached that conclusion, not the UNPROFOR French Battalion or the UN military observers who had also done their on-site investigations. The witness repeated that only the direction from which the shell had been fired was known when the report was drafted, and that the findings tallied with the those of the other two teams. After talking to the military observers at the observation post overlooking Sarajevo, and learning that they had not seen or heard a shell being fired from the BH Army positions, Konings went on to conclude that the shell had come from the other side of the mountain. This area, he said, was controlled by the Bosnian Serb Army.