THE MISTERY OF UN REPORT

Per Brennskag, former UN military observer, claims that the projectile that hit the Sarajevo TV building on 28 June 1995 was fired by the VRS. However, the UNPROFOR report written the day after the incident states that the projectile was "most likely fired from the BH Army positions”. According to the witness, some of the information in that report "was not correct" 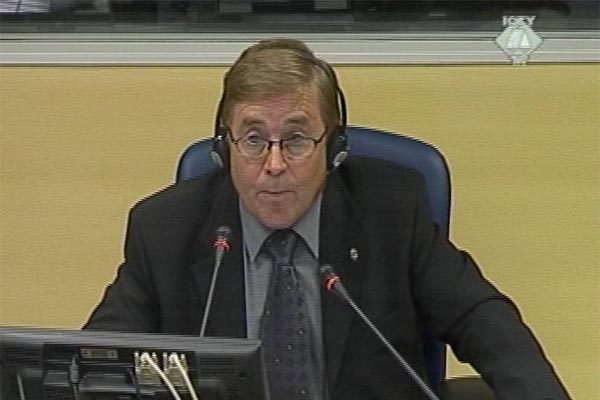 Per Brennskag, witness in the Dragomir Milosevic trial
A modified air bomb that hit the Sarajevo TV building on 28 June 1995 was fired from the positions controlled by the VRS. This is what Per Brennskag, former UN military observer, stated at the trial of Dragomir Milosevic. Milosevic is charged with the shelling and sniping campaign against the citizens of Sarajevo.

He claims that he saw that the modified air bomb had been fired from "the Ilidza area". From his observation post in Vitkovci, he was able to follow the white trace left by the bomb's rocket motor. After the motor burned out, the bomb could not be seen for a while, and then it hit the Sarajevo TV building.

The next day, UNPROFOR wrote a report on the incident and Captain Thomas Hansen signed it. The report concludes, among other things, that the bomb was "most likely fired from the territory controlled by the BH Army”. The witness said that in his opinion "some the information in the report was not correct", adding that he " never saw a modified air bomb being fired from the Muslim positions".

Branislav Tapuskovic, Dragomir Milosevic's defense counsel, had already referred to Captain Hansen's report twice so far, once in the cross-examination of a Sarajevo crime lab technician and once in the questioning of Rijalda Musaefendic who worked in the TV building at the time of the attack. The defense counsel argued then that the TV building was hit by a projectile fired by the BH Army, in an effort to pin the blame for the incident on the Serb forces.

Branislava Isailovic, Dragomir Milosevic's defense counsel, today followed a rather different line of questioning. She concluded that "what happened at the Sarajevo TV building is becoming more and more interesting" , arguing that the witness "maybe saw Hansen but did not know him". This was followed by a series of questions about the manner in which the Sarajevo incident reports were made. When Presiding Judge Robinson got involved in the questioning, Brennskag confirmed that he "did not write a report about this incident". What he did was radio in the report about the incident or personally notified the UN military observers command.

In the cross-examination, Isailovic pointed to parts of his statement where he says that there were BH Army positions close to the TV building and that mortar shells were fired from those positions. He also states that "there were uniformed soldiers moving around in the city center". Brennskag confirmed this, adding that he "never would have put a command post in an area inhabited by civilians".