GENERAL SMITH: NO EVIDENCE OF MUSLIMS SHELLED THEMSELVES

Testifying at the trial for the shelling of Sarajevo and the sniper campaign against its civilians, General Rupert Smith, former UNPROFOR commander, confirms he "heard the allegations" that the BH Army would open fire on their civilians but he was never "shown a single piece of evidence to corroborate them” 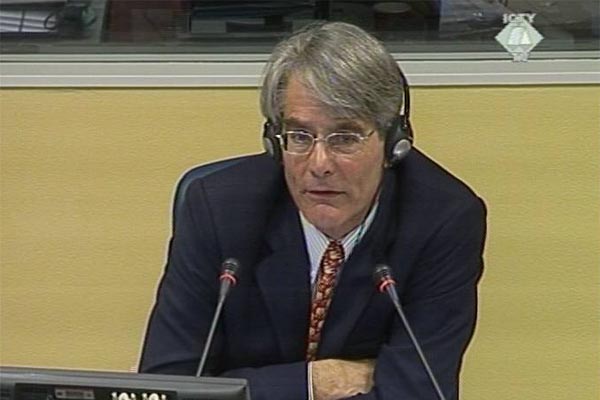 Rupert Smith, witness in the Dragomir Milosevic trial
British general Rupert Smith, the last UNPROFOR commander in Bosnia Herzegovina, took the stand today at the trial of general Dragomir Milosevic, former VRS Sarajevo-Romanija Corps commander charged with the shelling of Sarajevo and sniper campaign against its civilians from August 1994 to November 1995.

In a brief examination-in chief the prosecution went through the most relevant paragraphs in General Smith's comprehensive written statement. It was admitted into evidence together with other documents whose authenticity was confirmed by General Smith. Today General Smith confirmed the description of the Bosnian Serb strategy, the nature of command and control in the VRS and the peculiar manner in which General Mladic exercised command. General Smith described it as "centralized".

The former UNPROFOR commander said that the use of the artillery - to shell Sarajevo – was controlled at the level of the Sarajevo-Romanija Corps, and consequently of the accused General Milosevic who commanded the Corps. This assessment is of particular importance for the case. The witness thinks the sniper activities were coordinated at the battalion level, but they too could be "controlled from higher levels". Smith believes that the Corps command could issue orders to limit the sniper activity or to steer them to certain targets.

General Rupert Smith confirmed that he had concluded "beyond reasonable doubt" that the mortar shell that caused the Markale 2 massacre had come from the Serb positions around Sarajevo. He reached the conclusion by putting together the results of two investigations, undertaken by the UN military observers and the UNPROFOR Sarajevo Sector experts.

In the end of the examination-in chief, prosecutor Alex Whiting asked General Smith whether he had any knowledge of the BH Army "shelling and sniping at its own civilians". The former UNPROFOR commander said that he had "heard of such allegations", but that he was never shown "a single piece of evidence to corroborate them".

General Milosevic's defense counsel took those claims as the starting point for the cross-examination of General Smith. Tapuskovic referred to the book written by General Rose, Smith’s predecessor at the post of UNPROFOR commander, and the testimony of General Nikolai, General Smith's former chief of staff at this trial. General Smith said that he had not read General Rose's book. Rose himself never told him anything about the BH Army "shooting at its own people". As for Nikolai's statement, Smith noted that the Dutch general "merely presented unsubstantiated claims".