Three teams conducted separate on-site investigations after the Markale 2 incident. The Sarajevo police department, The French battalion and the UN military observers reached the same conclusion: the mortar shell was fired from the territory controlled by the Sarajevo-Romanija Corps 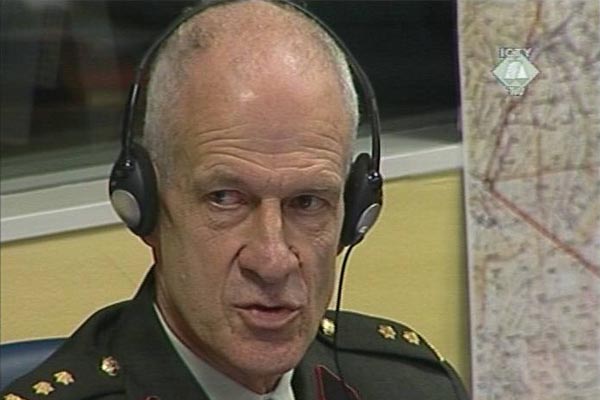 Harry Konings, witness in the Dragomir Milosevic trial
After the Markale town market massacre on 28 August 1995, in which 43 persons got killed and 75 injured, three independent investigations were undertaken: by the Bosnian police department team, members of the UNPROFOR French Battalion and a mixed team of UN military observers, headed by Dutch lieutenant colonel Harry Konings. Konings testified today at the trial of General Dragomir Milosevic.

According to Konings, the teams reached almost the same conclusion regarding the projectile type and the direction from which it had been fired. When he wrote the report, Konings was not able to determine the exact position from which the 120mm mortar shell had come. However, after talking to Tom Knustad, military observer stationed at the observation post on an elevation above Sarajevo, Konings concluded that the projectile had been fired from the territory "behind the hill", controlled by the Bosnian Serb army.

Last month, Knustad testified at the trial of General Milosevic. Lieutenant Colonel Konings elaborated Knustad's explanation with on-site technical details today. They both argued that the military observers had to have heard the firing of a 120mm mortar shell on a clear, quiet day with no wind, had it been fired from a position controlled by the BH Army close to their post. They both claimed that the military observers had not heard or seen anything that day.

General Rupert Smith and David Harland, who was the head of UN Civilian Affairs in BH, testified about the conclusions reached by UNPROFOR. According to the technical report filed by the UNPROFOR intelligence section – incorporating the findings of the investigations conducted by both the military observers and the French battalion operatives, the shell had been "fired beyond reasonable doubt from the VRS positions". A Sarajevo crime technician who had conducted the on-site investigation at the Markale town market testified about the similar findings of the Sarajevo police department team.

Due to the defense's repeated suggestions that the Markale massacre had been "staged" and that the dead bodies had been brought there, the presiding judge asked Konings to say whether this was possible. The witness said that it was "not impossible". However, he said he was convinced that the incident had not been "staged". There was no other shelling reported that day where so many people could have died. The corpses he saw in the morgue after the incident were "fresh". Konings believes that it was not possible "to make an explosion crater" that was not there when he passed by the town market for the first time that morning.

A victim of a modified air bomb that hit Alipasino Polje district in Sarajevo on 16 June 1995 testified before Konings today. Witness testifying under pseudonym 117 suffered minor injuries in the incident.