WAR OF WORDS IN THE COURTROOM

The cross-examination of witness Lakic Djorovic turned into a war of words between him and General Ojdanic's defense counsel. The witness was "offended" when the defense counsel said he was accusing his former colleagues in a "generalized, false and fanatical" manner 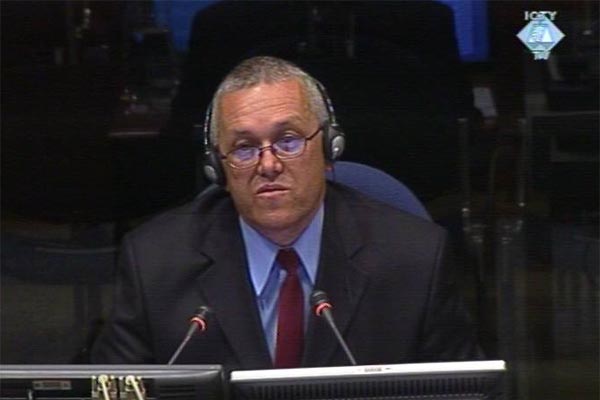 Lakic Djorovic, witness in the trial of the former Serbian officials charged with crimes in Kosovo
The cross-examination of Colonel Lakic Djorovic turned into a war of words with General Dragoljub Ojdanic's defense counsel. When the defense counsel said he was not speaking the truth, Djorovic replied that such claims "offended" him. The presiding judge repeatedly interrupted the evidence saying he was “utterly confused".

Judge Bonomy was "confused" mainly because the witness avoided to give direct answers to the questions asked by the counsel and the Chamber, preferring to explain at great length and with many digressions the events of the Kosovo war in 1999, at the time when he was the military prosecutor in the Belgrade and Pristina military districts.

Defense counsel Tomislav Visnjic argued that the witness was accusing his former colleagues he was now in conflict with "in a generalized, false and fanatical" manner. In the documents he signed, the witness called certain officers "security services collaborators, cowards and scared rabbits in uniforms". Djorovic admitted saying this, explaining that he wrote it because he believed that there were too few brave people in the army who would stand up to the pressure exerted by high-ranking military officials. In his examination-in chief the witness explained how they repeatedly asked him and other military investigating organs to drop the investigations against some VJ officers.

One of the key objections by the defense counsel was aimed at Djorovic’s evidence about the involvement of Major Slobodan Stosic in some crimes committed in Kosovo. Djorovic said yesterday that he had been forced to drop the investigation against Stosic, accused of robbing and expelling 700 Albanian civilians from the Decani area. Today he said that Stosic had been involved in the killing of 47 Albanians whose bodies were exhumed from a mass grave near Orahovac.

The witness mentions Stosic for the first time in the statement he gave to the OTP in 2006, even though he had talked about the indictments he had issued in Kosovo and about the problems he was facing in his statements to the Serbian judicial bodies in his direct contacts with the authorities. Today he claimed that he had not mentioned the name earlier because he had been threatened that he “would lose his head" if he did that. That is why today he gave additional explanations regarding his failure to mention Stosic in his previous statements in closed session.

Tomorrow the witness will be questioned by Vladimir Lazarevic's defense counsel. After that, protected witness K-87 will begin his evidence.