ARMY COVERED UP EVIDENCE OF CRIMES

Former military prosecutor testifies how the attempts to prosecute VJ officers responsible for the crimes committed in Kosovo failed because of the pressure exerted by the military security service. He had been exposed to constant threats ever since he had decided to testify in The Hague, yet he decided to do it in open session believing that by doing so, he was actually reducing the risk of something happening to him. He is sure that he "cannot be protected by those who threatened him" 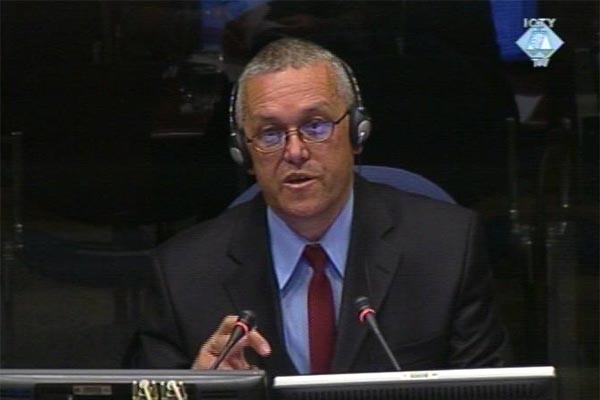 Lakic Djorovic, witness in the trial of the former Serbian officials charged with crimes in Kosovo
The military security organs obstructed the investigation of the crimes committed in Kosovo by the VJ soldiers. They destroyed the evidence and failed to turn in the perpetrators. Lakic Djorovic testified today at the trial of six Serbian officials. He described how the military judicial system functioned during the NATO campaign in Kosovo. On the first day of the air strikes, he was appointed the Belgrade Military District prosecutor. At his own request he was reassigned to Pristina on May 20, 1999 where he was appointed a prosecutor in the Military District there.

The witness asked to be reassigned to Pristina as, in his words, he was exposed to "terrible pressure" in Belgrade by the military security officers to suspend the investigation against some officers. When he arrived in Pristina, he faced similar problems. Major Nesic, chief of the Pristina Corps Security, came to his office with three armed men asking him to suspend the investigation against a Major Slobodan Stosic. A number of soldiers said that Stosic had taken part in the robbing and expulsion of about 700 Albanians from the Decani area. He asked Djorovic to suspend the investigation against several other officers suspected of or charged with Kosovo crimes. When he refused to do so, he was removed from the cases. The cases were transferred to Milos Spasojevic, the Pristina Corps military prosecutor. Spasojevic received 17 cases, including the investigation into the 47 corpses of Kosovo Albanians exhumed near Orahovac. Djorovic learned later that the majority of the cases had been suspended.

Djorovic claims he was exposed to threats when he refused to accept a vehicle illegally seized from the Kosovo Albanians. All his deputies and other VJ officers in Kosovo drove such vehicles. The prosecution tendered into evidence a military document, indicating that 1,333 vehicles were “confiscated” in Kosovo. The witness clarified that it was not a "confiscation" because the word implicates that there was a legal procedure for the taking of the vehicles. He said it was "in plain Serbian, just robbery and theft" adding that even today many high ranking VJ officers drove cars stolen in Kosovo and other war zones.

The prosecution informed the Trial Chamber today of the attempts to get hold of the files on the investigations Djorovic mentioned. The Serbian Ministry of Defense said that they did not exist. The witness believes that the military security service destroyed the evidence. He added that his investigations had been filed properly and that there were "living persons" who had worked the cases with him. The witness accused the Commission for the Cooperation with the Tribunal of not cooperating, but "destroying", and where possible, "tampering with and forging the documents" that could compromise high-ranking military officials. The Commission was established by Nebojsa Pavkovic, who was the Chief of VJ General Staff at the time, and who is now one of the six accused in this case.

The witness said that ever since he agreed to testify he had been exposed to constant threats from the military. Immediately before to his arrival to The Hague, he was threatened that he would have "both hands cut off at the elbow". Today he works as the head of the legal department in the Serbian Army Operational Forces and faces threats from his superior officers. Regardless of that, he decided to give evidence without any protective measures, believing that thus he would reduce the risk of anything happening to him. Although he repeatedly asked for physical protection, he does not put much store by it. He should be protected by the military, and he is sure that he "cannot be protected by those who threaten him".

Tomorrow, he will be cross-examined by the defense counsel of the six former Serbian political, military and police officials.