TRANSPORTING CORPSES “IN THE INTEREST OF THE STATE”

Former Serbian Interior Ministry employee describes how he transported the corpses four times from Tekija and from Kosovo to mass graves in Batajnica and Petrovo Selo. The task he was given was described to him as "very important and in the interest of the state". The defense counsel contested the part of the testimony in which the witness claimed that the accused Sreten Lukic gave him instructions to transport the corpses 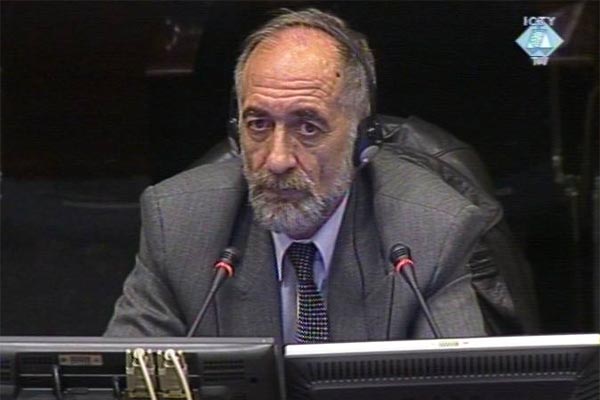 Bozidar Protic, witness in the trial of the former Serbian officials charged with crimes in Kosovo
At the trial of six Serbian officials charged with Kosovo crimes, Bozidar Protic, a driver in the Serbian Interior Ministry, described how he had transported corpses by truck in four batches from Tekija and Kosovo to mass graves in Batajnica and Petrovo Selo.

In April or early May 1999, Protic said, Dragan Nenadic ordered him to “get ahold of a truck” and to report to General Petar Zekovic, head of the General Services Directorate in the Serbian MUP. Nenadic, chief of the MUP garage where Protic worked, then told him he was to do "a task that was very important and in the interest of the state". The witness borrowed a truck from a friend and reported to Zekovic. He told Protic to go to Tekija to pick up the corpses from a refrigerated truck that the local police had found in the Danube. Fifty four corpses were loaded on his truck that time. He drove them to Batajnica on Zekovic's order.

According to the evidence given by Caslav Golubovic, former chief of Kladovo police, and Bosko Radojkovic, a police officer there, their driver had already taken 30 corpses to Belgrade before Protic’s arrival. Golubovic and Radojkovic claimed that they had transported the corpses and blown up the refrigerated truck in the Petrovo Selo area on the orders of Vlastimir Djordjevic, who was the chief of the Public Security Department at the time. Djordjevic is now a fugitive from the international justice.

After he moved the corpses from Tekija to Batajnica, Protic drove the truck three more times “in the interest of the state”. First he moved some 20 corpses to Petrovo Selo near Kladovo from the village of Janjevo in Kosovo. A couple of days later he transported another 55 or 56 corpses from southern Kosovska Mitrovica to the same destination. He unloaded them about 50 meters away from the pit where bodies he had brought there earlier had been buried. On one of those occasions, he saw the destroyed refrigerated truck from Tekija in a meadow near Petrovo Selo. And then he drove “a largest reefer there was” full of corpses from the parking lot of the Rilindija newspaper in Pristina to the Special Antiterrorist Unit (SAJ) center in Batajnica near Belgrade.

In a statement he gave to a Serbian investigating judge and a war crimes prosecutor, Protic said that he had been given the order to take over and unload the bodies by General Zecevic on all four occasions. Today he amended those claims. He now claims that General Sreten Lukic, who was the chief of the Interior Ministry Staff in Kosovo, gave him further instructions by phone on two occasions, when he was transferring the corpses from Janjevo and Kosovska Mitrovica to Petrovo Selo.

In his cross-examination, the defense counsel of the accused police general contested this statement accusing the witness of speaking against Lukic only because "he refused to grant him a flat illegally." The witness admitted to asking Lukic to do that, because he could not live in Batajnica after all that had happened. He repeated that he was "99.9% sure” that he had heard Lukic's voice over the phone". When the defense counsel asked why he failed to mention that to the Serb judicial bodies, the witness said that he kept silent because he feared for the lives of his wife, daughter and son who all worked in the Interior Ministry. At the time his statement was taken, Lukic was the Chief of the Public Security Department.