NEW REQUEST OF THE PROSECUTION AT THE END OF ITS CASE 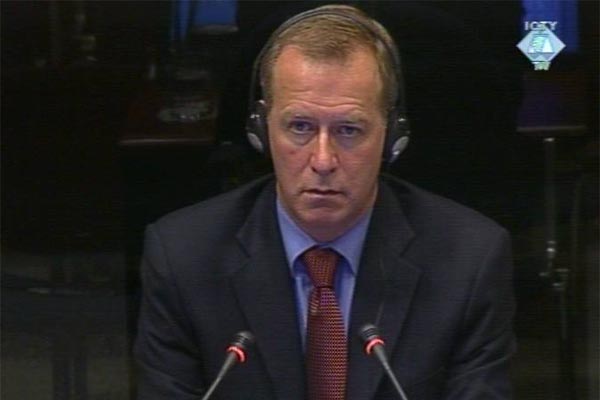 Phillip Coo, witness at the Slobodan Milosevic trial
The prosecution rested today at the trial of six Serbian political, military and police officials charged with Kosovo crimes. Military analyst Phillip Coo was the last witness to testify and before him the prosecution called 110 witnesses, since the beginning of its case on 10 July 2006.

Before Phillip Coo took the stand today, the presiding judge announced that the Trial Chamber had decided not to admit the Canadian analyst’s report into evidence. The Trial Chamber agreed with the defense and found that the document contained a series of conclusions which should have been made by the judges, not by a witness. The only document to be admitted into evidence was his statement describing how he obtained a number of VJ and Serbian Interior Ministry documents related to the Kosovo events. In his short testimony, Coo said that in March 2006 the prosecution had finally been granted full access to Serbian archives after “a difficult procedure”. The Trial Chamber will decide later which of these documents will be admitted into evidence.

The prosecution indicated that besides 111 witnesses, it would like to call three more potential witnesses. If the Trial Chambers agrees, the prosecution will call Zoran Lilic, former FRY president, Shaun Burns, head of the US Embassy mission in Kosovo and Wesley Clark, former NATO commander.

There will be a conference tomorrow to deal with the further course of the trial and the date on which the defense will begin its case. Earlier on it was announced that both parties will present their arguments pursuant to the Rule 98 bis of the Rules of Procedure and Evidence in the last week of March. This rule allows the judges to acquit the accused on all or some counts of the indictment if they find that the prosecution failed to present enough evidence to convict them in the course of its case. As indicated by the Trial Chamber, the defense must be ready to start its case by 15 June 2007.