WHAT IS THE DIFFERENCE BETWEEN KOSOVO AND AFGHANISTAN

Head of the UNMIK Missing Persons Office compared the forensic evidence from Afghanistan and Kosovo to explain why in his view the Albanians whose bodies were found in Batajnica, Petrovo Selo and the Perucac lake had not been killed in action 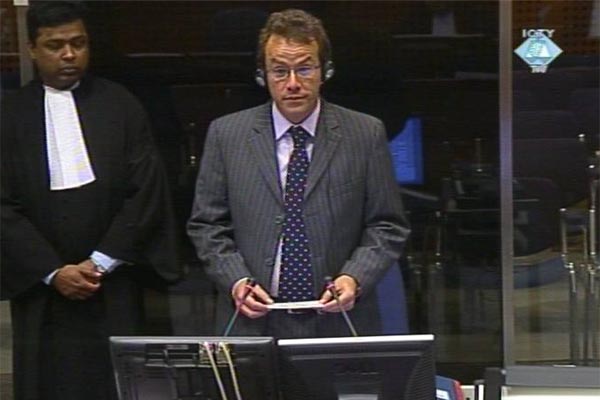 Jose Pablo Baraybar, witness in the trial of the former Serbian officials charged with crimes in Kosovo
Jose Pablo Baraybar, forensic anthropologist from Peru, concluded that the Kosovo Albanians whose bodies had been found in mass graves in Serbia had not been killed in action. Baraybar has been the head of the UNMIK Missing Persons Office since 2002.

Baraybar is testifying at the trial of six Serbian officials and generals charged with Kosovo crimes. Today he explained that he had reached this conclusion by comparing the forensic analyses of the remains of 889 corpses found in the mass graves in Batajnica, Petrovo Selo and the Perucac lake. The Serbian authorities handed over the dead bodies to their families from 2002 to 2006.

Most of the persons killed in the fighting in Iraq, Afghanistan and the Balkans were victims of "ammunition fragmentation", Baraybar explained. In other words, shrapnel killed many more persons that bullets did. Afghanistan is a case in point. According to an anthropological study from 1998, 73 percent of the fighters died of shrapnel wounds, and 26 percent were killed by bullets. Contrary to that, only 4 of the 588 dead bodies recovered in Serbia had shrapnel wounds. This represents only 0.6 percent of the overall number. All the other victims were killed by bullets.

Bullet wounds were found mostly in the heads and torsos of the victims, Baraybar clarified. In his view this tends to show that they had not been killed in action. The soldiers killed in action as a rule have wounds in the unprotected parts of the body, such as face, neck or groin.

Jose Pablo Baraybar is the first prosecution witness that was not cross-examined by the defense counsel of the Kosovo Six. His testimony finished sooner than expected. The presiding judge left it to him to take it “as a compliment" or as something else.

In the second part of the session today, Joseph Omer Michel Maisonneuve began his testimony. The Canadian general was deployed in Kosovo from 1998 to 1999 as the head of the Prizren Regional Center of the Kosovo Verification Mission.