"WILL OF PEOPLE", BUT WHICH PEOPLE?

In his cross-examination, Ambassador Wolfgang Petritsch repeats that the phrase "the will of the people" in the Rambouillet document made it possible to hold a referendum about the province’s status both in Kosovo and in Serbia. In his view, though, this would have resulted in a deadlock which could be resolved only by a compromise 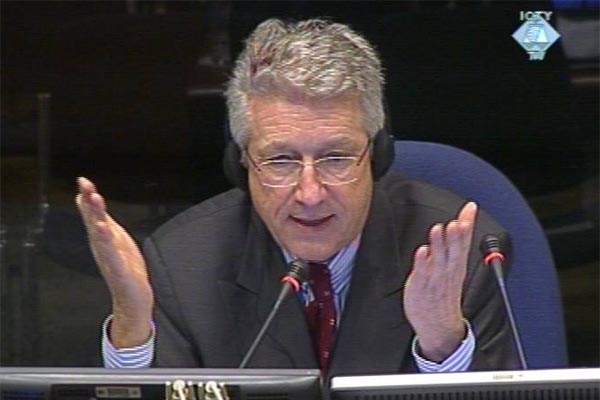 Wolfgang Petritsch, witness in the trial of the former Serbian officials charged with crimes in Kosovo
In today's cross-examination at the trial of six Serbian officials charged with Kosovo crimes, Milan Milutinovic's defense counsel and witness Wolfgang Petritsch spent most of the time arguing whether the draft Rambouillet agreement envisaged a referendum on the status of province after a three-year period. The defense argued that the term "the will of the people" implied a referendum. The witness repeated that the wording had been put there so that the international mediators did not find themselves bound by the results of any future referendum.

Petritsch added that the term "the will of the people" made it possible for the Serbian side to organize a referendum on the status of Kosovo in its entire territory as the province was part of Serbia. This meant, Petritsch explained once again, that any solution could only be reached with the consent and compromise from both sides.

Milutinovic's defense counsel said that the US State Secretary Madeleine Albright promised the Kosovo delegation that the province’s status would be decided at a referendum after a three-year period. The witness agreed, but said that it did not influence the future course of events. “ We the negotiators, could not control what the foreign ministers of other countries were doing, but their promises were not part of the agreement,” Petritsch said.

In his examination-in chief Petritsch said that Milutinovic had told him, in an informal conversation in Rambouillet, that there "will be a massacre in Kosovo" if NATO were to intervene. He and other foreign negotiators took it as a threat. In his evidence at the Slobodan Milosevic trial and in his statement to the OTP Petritsch claimed that Vladimir Stambuk, who represented the Yugoslav Left in the delegation, had said this.

When this was brought to his attention today Petritsch said that he was sure that Milutinovic had mentioned this scenario, as had Stambuk. He remembered this not long ago when he looked at one of the dispatches he had sent from Rambouillet to Vienna, where he wrote down Milutinovic's words about "the massacre in Kosovo".

After Petritsch, the prosecution called witness K-14. Her testimony began in closed session.