REFERENDA ARE NOT FOR THE BALKANS

Ambassador Wolfgang Petrisch claims that the deal was for the Rambouillet agreement to "be reexamined and revised" after three years, taking into account "the will of the population". This wording included both the Serbian and Albanian side and it did not inevitably envisage that a referendum would be called. The international community "already learned the lesson from the referendum in BH" 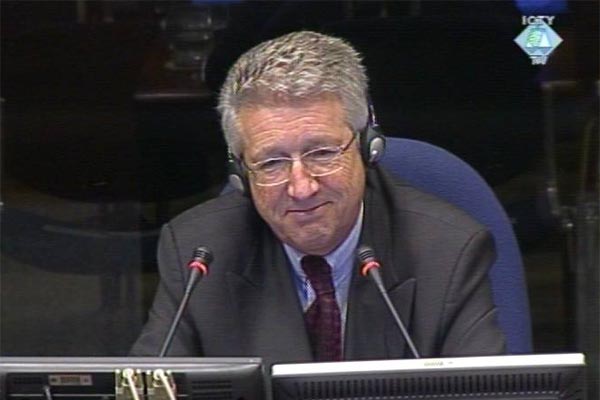 Wolfgang Petritsch, witness at the Slobodan Milosevic trial
A referendum in which Kosovo citizens would decide on the status of the province was not envisaged in the draft Rambouillet agreement. It merely stipulated that "after three years, the agreement would be reexamined and revised". This is what Wolfgang Petrisch, former Austrian ambassador in Belgrade and the EU special envoy to Kosovo, indicated in his testimony today.

At the trial of six Serb politicians and generals charged with the Kosovo crimes, Petrisch explained today that the expression "the will of the population" included the Serbian side too, but that it did not inevitably mean that a referendum would be called. What it meant was that the status would be decided with the consent of both parties. The international community, he said, learned its lesson from the BH referendum that had led to war. "A referendum is not the best solution for the communities in the Balkans. They were not real democracies; they were based on the ethnic affiliation,” Petrisch clarified.

Petrisch repeated today what he had already said at the Milosevic trial in 2002: on 23 February 1999, the Yugoslav delegation, headed by Ratko Markovic, accepted the draft Rambouillet agreement and agreed to continue talks in Paris on 15 March 1999. "Something happened" in the meantime, he said, and the talks failed. President Milutinovic announced the change of course in a speech he made on 4 or 5 March 1999, saying that the agreement would not be accepted and that the Serbian side had “totally changed its attitude".

In his cross-examination, the defense counsel of the former Serbian president asked the witness just a couple of questions related to the Rambouillet negotiations. He spent most of the time trying to prove that the Serbian side had been cooperative in the course of 1998. Petrisch was shown with a series of press releases issued by the Serbian authorities urging the Albanian politicians to negotiate. Petrisch replied that those calls had not been particularly sincere as they had often been issued just a day before the start of negotiations and the Albanian side would refuse to show up.

The fact that Serbian authorities negotiated regularly with representatives of the Roma, Egyptians, Turks, Ashkalia, Goranis and other minorities could not convince Petrisch that Belgrade sincerely wanted the negotiations to proceed. He commended the Serbian side for highlighting the fact that there were other minorities in Kosovo besides the Serbs and Albanians but reminded the court that the representatives of those ethnic groups had been loyal to the Serbian authorities and "didn't have any weight in the Kosovo reality".