WHEN DEAD BODIES FELL OUT OF TRUCKS

A logistics police officer testifies about the dead bodies transferred from Kosovo to Batajnica in the spring of 1999 to be buried there. He described some of the incidents en route and at the burial 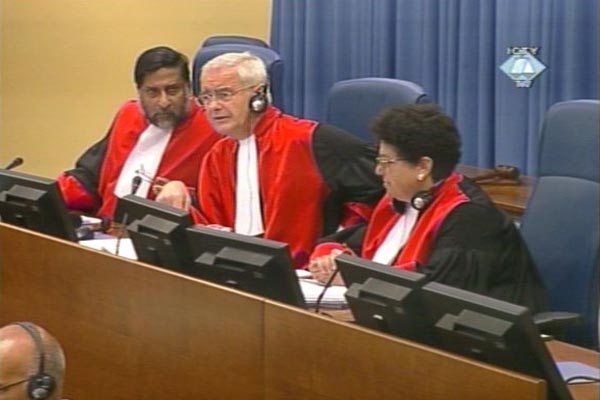 The trial chamber in the case of the former political, military and police officials charged with crimes in Kosovo
Protected witness K-88 took the stand today at the trial of six officials from Serbia charged with Kosovo crimes. He described what he had learned about the bodies of Albanians killed in Kosovo in his capacity as a logistics police officer. The bodies were transferred to Serbia to be buried in the Special Antiterrorist Unit (SAJ) range in Batajnica. In his brief evidence he gave with protective measures - image and voice distortion – the witness confirmed the claims he had made in two statements he had given to the OTP investigators in 2005 and 2006. Both statements and the map on which he draw the locations of all Batajnica mass graves were admitted into evidence today.

The witness claims he saw six trucks arriving to the SAJ base in Batajnica in the spring of 1999. They were loaded with the dead bodies of Kosovo Albanians. The bodies were then buried in eight mass graves at the firing range. At the same time, the police officers set the tires on fire to prevent NATO from observing the location. As K-88 explained, "we set about a hundred tires on fire around each pit and the thick smoke shielded us from NATO planes".

The trucks full of dead bodies sometimes remained in the base up to 15 days. "Something was leaking from the trucks", he said. Before digging the pits, he and his colleagues spilled gasoline one the areas where there had been leakage and then set the soil on fire, because they could not fight the stench of the leakage with toilet cleaning acid.

The witness said that the transport and the burial of the bodies were "quite chaotic". The trucks carrying the dead bodies were in a very poor condition. He talked to the drivers of one of the trucks and he told him that "the side of the truck broke" on their way from Kosovo and some 50 bodies fell out on the road. They had to stop and pick them up and continue to Belgrade. K-88 explained that all six truck drivers had worn police uniforms. One of them was a state security officer and spoke with a Montenegrin accent.

As today's session drew to a close, the prosecution indicated it might rest by the third week of March. The trial of the six Serbian officials continues on Monday. Wolfgang Petritsch, former Austrian ambassador to the FRY, is among the witnesses scheduled to take the stand next week.