The shell that hit Markale in August 1995 was fired from the territory controlled by Bosnian Serbs, says UN military observer Tom Knustad. The shell was fired from the direction where the UN had its observation post. The witness was at the post at the time of the explosion 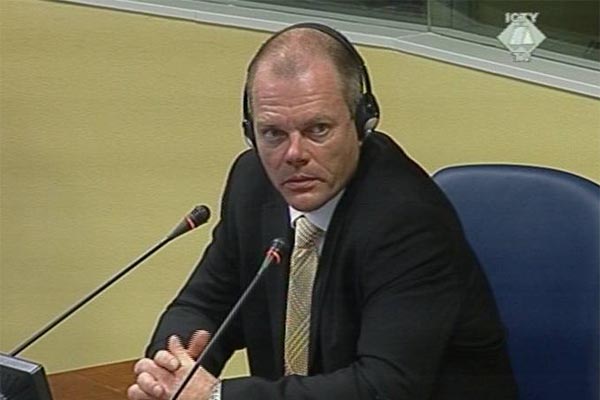 Thom Knustad, witness in the Dragomir Milosevic trial
On 28 August 1995, a shell fell on the Markale market in Sarajevo, killing 43 and injuring 75 people. It was fired from the territory controlled by Bosnian Serbs, concluded Norwegian officer Thom Knustad. At the time of the explosion, he was at a UN observation post located in the south of the city, at Colina Kapa. Testifying at the trial of General Dragomir Milosevic, Knustad said that he had heard an explosion on 28 August 1995 at around 11 a.m., and saw black smoke rising from the market. He did not see where the shell had been fired from.

His colleagues in the observer team carried out an investigation at the scene at Markale and concluded that the shells had been fired from a southerny direction. Knustad’s observation post was located there. Since the confrontation line was there, it was possible in theory that the shells could have been fired from the territory controlled by the BH Army. The witness rejected this possibility out of hand, saying he would have heard a 120 mm shell being fired from that area at the post where he was. Since he did not hear the sound, he is convinced the shell had been fired from the other side of the hill, from positions held by the Republika Srpska Army (VRS). He is quite sure of this, even though both he and his colleagues in the observer team knew of what he called “various conspiracy theories” according to which the BH Army “fired on its own people”.

His observer team had carried out a number of investigations at other scenes where Sarajevo civilians were killed or injured by shells, he stressed, but they never established that the BH Army had fired on the citizens of Sarajevo.

In the cross-examination, the defense counsel representing the accused general tried to prove that the shell had been fired from the BH Army-controlled territory. To support the claim, defense counsel Tapuskovic presented to the witness a report by General Janvier, stating that “it is difficult to determine the site from which shells are fired” in general, and the shell that hit Markale was no exception. The witness agreed with this statement, but then went on to explain why he had nevertheless concluded where the shell had been fired from.

In his examination-in-chief, Knustad said he had once seen the firing of a modified air bomb on the city. The bomb was fired from VRS-controlled territory. In the cross-examination, the defense counsel tried to paint the projectile – known as a “pig” – as virtually harmless. He asked the witness whether it was true that the “pigs” flew so slowly that the people could see them and then had “a minute or two” to take cover. “No”, Knustad said.

At the end of the session today, Azem Agovic started his testimony. On 3 March 1995 he was wounded in a Sarajevo tram by a sniper.