NO PLANS FOR RETURN RIDE

The witness who took the stand today at the Dragomir Milosevic trial today was a tram driver in Sarajevo in 1994. He testified about several sniper attacks and an artillery attack on trams he drove in 1994. To describe the situation he and his passengers were in during those days, he said "You could plan you’d go there, but not that you’d come back” 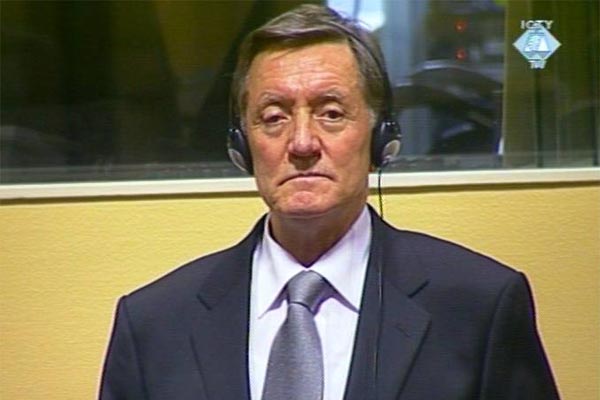 Dragomir Milosevic in the courtroom
The prosecution continues its case with the testimony of a protected witness testifying under pseudonym 54. He is testifying about the attacks against civilians in Sarajevo trams from August 1994 to November 1995, the period when the accused general Dragomir Milosevic was the VRS Sarajevo-Romanija Corps commander. Testifying with the image and voice distortion to protect his identity, the witness described the artillery and sniper attack on the tram no. 207 he was driving on 21 November 1994.

As the witness recounted, the attack occurred near the Holiday Inn Hotel. A shell exploded in front of the tram, one meter away from it. It blew the tram windshield to pieces. His face was cut in several places. He lay down on the tram floor and pressed the gas pedal with his hand so that the tram continued towards Pofalici. However, before they got under cover, the tram was attacked by snipers. Luckily no one was killed. Only later did the witness learn several passengers had been injured.

The witness believes the shell and the sniper shots were fired from the direction of Grbavica. Grbavica was under the control of Serbian forces. Dragomir Milosevic's defense counsel pointed out it was possible that the fire had been opened from the buildings between Grbavica and the tram line, an area controlled by the BH Army. The witness dismissed this allegation claiming there were no BH Army soldiers in those buildings.

The witness said that Sarajevo trams were "constantly targeted by the VRS in 1994”, when he worked as a tram driver. Describing the circumstances he and his passengers were facing at the time, he said "You could plan you’d go there, but not that you’d come back”. Apart from the attack on 21 November 1994, he survived three more sniper attacks on trams that he was driving the same year.

As today's session drew to a close, Norwegian officer Thomas Knustard began his testimony. He was in Sarajevo as part of the UN Mission from June 1995.