ONE TO TEN RATIO

“If one Serb civilian got killed in Sarajevo, we could expect ten Muslims to be killed soon afterwards,” Canadian general David Fraser said, describing the disproportionate Serb response to the BH Army attacks. Did the accused General Milosevic have nightmares because of "targets with civilians all around them"? 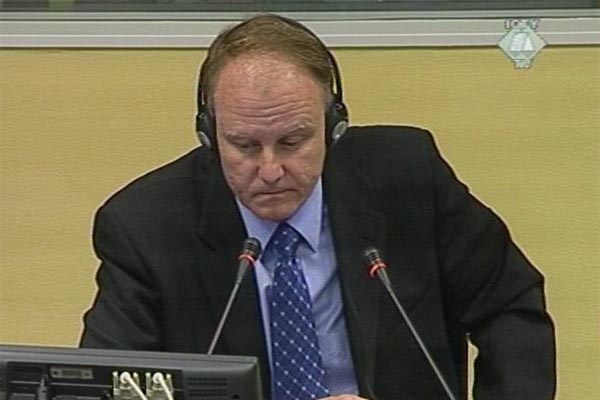 David Fraser, witness in the Dragomir Milosevic trial
"The ratio was one to ten. If one Serb civilian got killed, we could expect that ten Muslims would be killed soon afterwards.”

That was how Canadian general David Fraser described the way in which Serb forces responded to the BH Army fire. He was the military assistant to the commander of the UN forces in Sector Sarajevo between April 1994 and May 1995. “For the most part, their response was disproportionate", he went on to say.

The BH Army attack on the Lukavica barracks was a case in point. The Sarajevo Romanija Corps HQ was located in the barracks as was General Dragomir Milosevic’s staff. The BH Army fired four mortar shells that hit the barracks. According to the witness, who until recently commanded the Allied troops in Afghanistan, this was a legitimate military target, "a military strike against a military target".

In his opinion, the Serb side responded disproportionately, "with barrage fire on the city". In his answer to the judges’ questions, Fraser listed three criteria a responsible commander had to take into account when considering his response to an enemy attack. The first is the selection of a military target for the retaliatory strike. The second is the collateral damage risk assessment. The third is that the use of force has to be proportionate to the attack. None of the criteria was met in the case of the response to the attack on Lukavica.

General Fraser confirmed that it was very difficult, if not impossible, for the Serb side, to return fire on the BH Army mortar positions. The shells were fired from the trucks moving around town, exposing civilians to danger. He said that in a situation like that he would have to decide not to retaliate, because it was too difficult to locate the military targets and there was great risk of collateral damage.

In the cross-examination, General Milosevic’s defense counsel asked General Fraser if a warring side could gain "military advantage" if it placed its "military installations inside civilian zones". The witness agreed that "a certain military advantage could be gained as such targets are difficult to attack". He added that this "simultaneously increased the risks of civilian casualties".

Milosevic’s defense is trying to prove that the BH Army commanders exposed its civilians to unnecessary risks. Today the defense counsel concurred with the standards presented by General Fraser. She agreed with his evidence at the trial of Stanislav Galic in 2002. Fraser then said that "a target surrounded by civilians is every commander's worst nightmare".

On the other side, the prosecution is trying to prove that neither General Milosevic, nor General Galic, his predecessor as Sarajevo-Romanija Corps commander, had any nightmares about targets in Sarajevo located in the midst of civilians.