Sanjin Hasanefendic, Sarajevo police crime scene technician, described how civilians had been killed in several shelling incidents in Novo Sarajevo in 1994 and 1995. General Dragomir Milosevic's defense counsel maintained that nobody had been killed in those incidents, claiming that the bodies had been brought there from other places and that the witness took part in the staging of the incidents 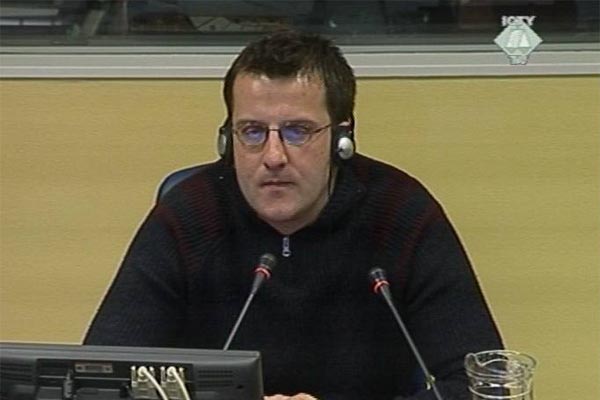 Sanjin Hasanefendic, witness in the Dragomir Milosevic trial
Sanjin Hasanefendic is a former Sarajevo police crime scene technician. He took part in the on-site investigations of some 200 artillery attacks and five to ten sniper attacks in Sarajevo. The witness claims that only civilians were targeted in the attacks; there were no military targets. At the trial of General Dragomir Milosevic today, he described a number of shelling incidents that occurred between August 1994 and November 1995, the period covered by the indictment.

A civilian was killed in the explosion of a modified air bomb that hit the Bitas office building. He was in his car in front of the building. This incident is listed in the appendix to the indictment. The witness testified about a few artillery attacks that are not listed there. One of them was the shelling of Velesici on 18 July 1995. The shell hit a house, killing a father and his son. Another civilian was killed in another house. According to the witness, the results of the investigations he participated in showed that all the shells and modified air bombs had been fired from the Bosnian Serb army positions.

In the cross-examination, Milosevic’s defense counsel claimed that nobody had been killed at the sites the witness spoke about. Although he didn't deny the fact that civilian targets had been shelled, he claimed the dead bodies had been brought in from other places. He went as far as to accuse the witness of taking part in staging the incidents. The defense counsel came to this conclusion because the witness had not photographed the blood stains on the ground, but only the dead bodies.

Judge Harhoff warned the defense counsel that his claims had to be corroborated by more solid evidence. The consequences of the shelling are less important for the Trial Chamber than the fact that there was shelling. That is why General Dragomir Milosevic is in the dock. As defense counsel Tapuskovic persisted in his claims, witness Hasanefendic said that perhaps his evidence could be compared with the evidence of other witnesses who testified about the same incidents, the police officers who also did the on-site investigations and the victims’ relatives and neighbors.