JACKET WITH A BULLET HOLE BRINGS TESTIMONY TO EARLY END

Dragomir Milosevic's defense counsel demonstratively refused to examine the prosecution witness. The witness gave evidence in the same jacket he wore 12 years ago when he was injured by a sniper. The defense counsel thought this showed that the Sarajevo police did not investigate the incident in a professional manner and that there was no need for him to cross-examine the witness 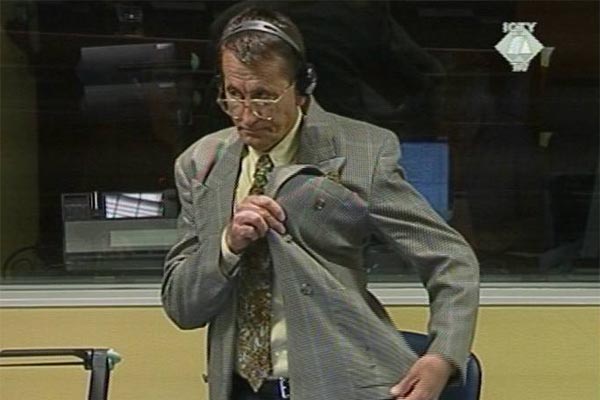 Azem Agovic, witness in the Dragomir Milosevic trial
The testimony of Thom Knustad, a UN observer from Norway, was followed by the shortest testimony to date at the trial of General Dragomir Milosevic. Milosevic is charged with crimes against the Sarajevo civilians committed between the summer of 1994 and the fall of 1995. The witness, Azem Agovic, was wounded by a sniper on 3 March 1995. His testimony lasted only 15 minutes. The prosecution tendered his statement into evidence and asked him a few additional questions. The defense cut the cross-examination short after just a few minutes.

In the examination-in chief, Agovic described how he had been wounded in the hip as the tram he was in moved along one of Sarajevo's main streets, Zmaja od Bosne Street. From the position of his body and the entry and exit wounds, the witness was able to estimate that the shot had been fired from the direction of Grbavica. This area was controlled by the Bosnian Serb army. The witness came into the courtroom wearing the same jacket he wore on 3 March 1995. He put it on for the first time after 12 years.

This caught General Milosevic’s defense counsel Tapuskovic by surprise. He first asked the witness to show him the bullet hole in the jacket and then demonstratively cut short his cross-examination. Apparently, this led him to believe that the Sarajevo police had not done a professional job because they had not photographed the jacket and kept it as a corpus delicti. The witness said that they could not have done so because the jacket had been with him in the intensive care unit in the hospital, but his explanation didn't help.

The Chamber found that the defense had the right to examine or not to examine prosecution witnesses. It ordered the prosecution to deliver the witness's medical records related to the injuries he had sustained in the incident as soon as possible.

Alen Gicevic testified about the same incident before Agovic. He was wounded in leg, as was Slavica Livnjak. She drove the tram in which Agovic and Gicevic were hit.