MUSLIMS NOT WELCOME, NO MATTER WHERE THEY COME FROM

Mohamed Asam Butt, a lieutenant colonel from Pakistan, described an incident in which a French UNPROFOR soldier was killed by a sniper near the Holiday Inn Hotel in April 1995. Soon afterwards, he himself was targeted by Grbavica snipers. On his arrival in Sarajevo, the witness was expelled from the territory controlled by Bosnian Serbs, because “Muslims are not welcome”, even if they were UN military observers 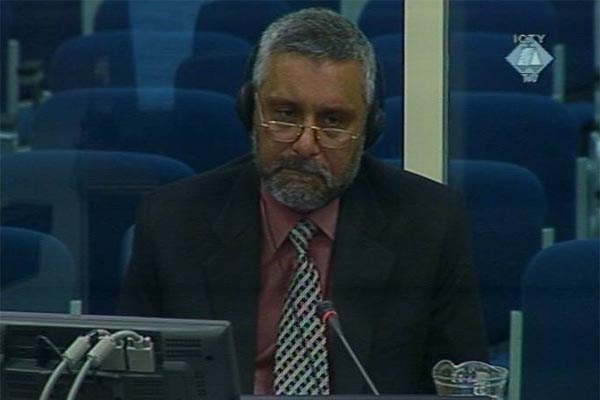 Mohammed Asam Butt, witness in the Dragomir Milosevic trial
Mohammed Asam Butt, former UN military observer from Pakistan, described several sniper incidents as he took the stand at the trial of General Dragomir Milosevic. The victims were Sarajevo civilians and, in one incident, he himself was targeted by a sniper. On 16 April 1995, he wanted to carry out an on-site investigation at a crossroads near the Holiday Inn Hotel, where a member of the UNPROFOR French Battalion was killed by a sniper the day before. The French soldier was operating a forklift to put a container in place. The container was to protect the Sarajevo civilians from sniper attacks.

Upon their arrival to the crime scene, the witness, another military observer and an interpreter were under sniper fire. This lasted one hour. They took cover behind the very container the French soldier had brought there the previous day. As Lieutenant Colonel Butt noted, the fire was opened at them from the Metalka building in Grbavica. The building was controlled by the VRS. He reached that conclusion because he had seen several Serb soldiers moving around the building before fire was opened at him. He was able to inspect the Metalka building at a later date and found sandbags the snipers used for cover on the floors with the best view of the place where he had been shot at.

When he came to Sarajevo in October 1994, Butt was first deployed to Grbavica as a military observer. He spent only one hour and a half there: one hour in detention. The Serb authorities arrested him and expelled him to the part of Sarajevo controlled by the BH Army. Later he found out that they had done so because "Muslims were not welcome on the Serb side".

The next witness gave evidence under the pseudonym 82 and with image distortion. She described how she had been wounded on 23 July 1995 in Sokolovic kolonija, a neighborhood in Sarajevo. The shell that wounded her was fired from the direction of Ilidza, where Bosnian Serb forces had their positions. The shrapnel hit her in the shoulder and chest as she was having coffee with four of her neighbors in front of their house. Two of them were killed in this incident.

Sanjin Efendic began his testimony today. He is a crime scene technician in the Novo Sarajevo police station. He investigated some 200 artillery attacks and five to ten sniper attack on civilians in that part of the town.