Three witnesses testify about the sniper attack on a Sarajevo tram on 23 November 1994. One person was killed and six injured in the attack. The defense counsel challenges their evidence, claiming that "there were constant clashes and exchanges of fire between the two sides in that part of Sarajevo" 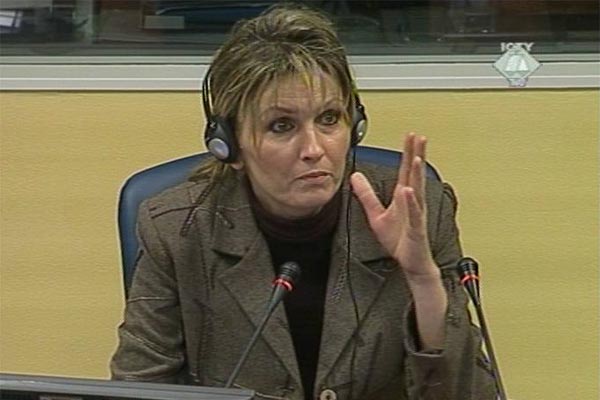 Sabina Sabanic, witness in the Dragomir Milosevic trial
Sabina Sabanic took the stand today at the trial of General Dragomir Milosevic. "You don't feel the pain when you’re wounded", she said. On 23 November 1993, she was in a tram passing by the Holiday Inn Hotel in Sarajevo, when she saw a wounded person beside her. "Panic reigned” in the crowded tram car. “Everybody wanted to get out but it wasn’t possible until the tram got some cover behind the Museum building”, she said. She was not well, she felt like she was about to faint, but she thought it was because she was afraid. Only a bit later did she realize she was wounded in her shoulder.

Sabina Sabanic is a victims of the sniper incidents listed in the indictment against General Milosevic, former VRS Sarajevo-Romanija Corps commander. Five more persons were injured and one was killed in the same incident. She claims the shots were fired from one of three skyscrapers in Grbavica. At that time, Grbavica was controlled by the Bosnian Serb Army.

In the cross-examination, Branislava Isailovic, General Milosevic's defense counsel, claimed the tram was hit in an area of where there were "constant clashes and exchanges of fire between the two sides”. The witness agreed that the area had been under constant fire coming from the direction of Grbavica. But as she said, she never saw any return fire and she never found herself in cross fire there.

Kemal Buco testified after Sabina Sabanic. He is a retired state security inspector and during the war he took statements from persons injured in artillery and sniper attacks. The prosecutor tendered into evidence the official record on the sniper attack on the tram on 23 November 1994. The record was written by Buco on the basis of a report made by a ballistic experts and crime scene technicians after the on-site investigation. He also interviewed the persons injured in the incident in the hospital. Buco's record said that that the ballistic report indicated the sniper shots had come from the direction of Grbavica.

The defense counsel tried to challenge this and other claims made by Kemal Buco, pointing to the fact Buco had never actually been to the crime scenes and that the on-site investigation teams had not included military personnel. Indicating that it would be calling a number of generals to testify for the defense, the defense counsel criticized the witness for “not calling at least a BH Army captain to help determine the truth behind the incidents".

Huso Pala began his testimony as today’s hearing drew to a close. On 23 November 1994, he was driving the tram in which one person was killed and six persons injured. The prosecution tendered into evidence his statement about the incident. The defense will cross-examine him on Monday.