While the defense counsel for the Kosovo Six claim that Ibrahim Rugova attended the meetings with Serbian officials in April 1999 "voluntarily" with the army and the police "protecting" the president of the Kosovo Democratic League (DSK), the witness maintains Rugova was acting out of fear for his own safety and that of his family 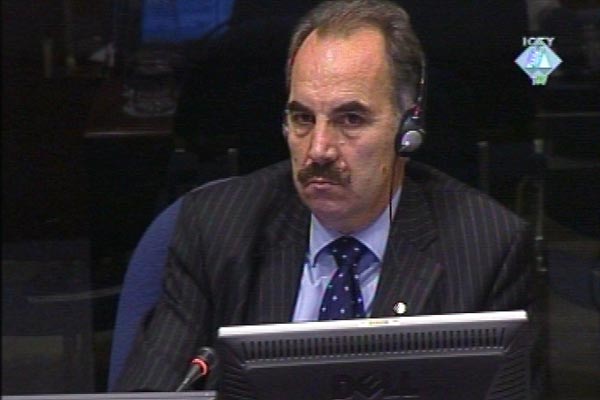 Adnan Merovci, witness at the Slobodan Milosevic trial
As the cross-examination of Adnan Merovci continued, the defense counsel for the six Serb officials indicted for crimes in Kosovo tried to prove that Ibrahim Rugova had attended the meetings with the Serb officials "of his own free will" and that he had made the press releases "voluntary", and had not been "coerced" as the witness claimed yesterday. Merovci, Rugova's personal assistant at that time, stated yesterday that from 31 March till 4 May 1999 the army and the police held him, Rugova and Rugova's family under house arrest in Pristina. Rugova, the president of the Kosovo Democratic League (DSK) was taken from his home to meetings with Serbian officials. After the meetings, he made statements under duress. He did so only to protect himself and his family.

To refute Merovci's argument, Toma Fila, representing Nikola Sainovic, noted that at that time the witness was "walking freely around Pristina". When he went out it was hardly "voluntary", the witness noted, because he was under police escort at all times and that Rugova himself was denied any such "luxury", the witness replied.

The defense counsel for police general Sreten Lukic actually took this idea one step further, suggesting that the police escort was there to ensure the witness's safety in the same way as the police surrounded Rugova's house in order to protect him and his family. This argument was further supported by a story of an armed Albanian shot to death by the police on 3 April 1999 when he tried to enter Ibrahim Rugova's house.

The witness insisted Rugova had been kept under house arrest and had been allowed to leave only to attend the meetings with the Serb officials under police escort. He issued press releases only because his family was also under house arrest. As regards the man who attempted an attack on Rugova on 3 April, as the defense alleges, the witness said the man was Rugova's driver coming to help him and not to do him any harm.