TOP SERBIAN ECHELONS KNEW ABOUT THE CRIMES IN KOSOVO

On the second day of his testimony, General Aleksandar Vasiljevic lists the crimes against ethnic Albanians that the authorities knew about, tells the court how the army and the police blamed each other, and how Yugoslav president Slobodan Milosevic dealt with the killings of Albanian civilians 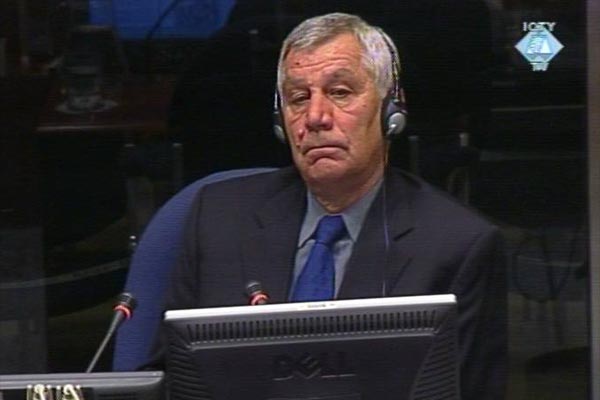 Aleksandar Vasiljevic, witness in the trial of the former Serbian officials charged with crimes in Kosovo
In his evidence at the trial of the Kosovo Six, General Aleksandar Vasiljevic downplayed the responsibility of the Yugoslav Army (VJ) for the crimes against Kosovo Albanians, just as he had done four years ago at the trial of Slobodan Milosevic. He did admit, however, that by mid-May 1999, the top Serbian military and political structures had known about them.

In April 1999, Vasiljevic re-joined the army once again, agreeing to become the deputy head of the Security Directorate. He had retired seven years earlier after his dismissal from the post of the head of the Security Directorate. In the first few months after the war broke out the military intelligence service had no information about the crimes in Kosovo, he claims. He received the first reports of the killings, looting and rapes of ethnic Albanians on 8 May. Among the incidents he was informed about was the killing of 12 Albanian civilians in Podujevo by the Scorpions, who were under the command of the Special Antiterrorist Units in the Serbian Interior Ministry. There were ten children among the victims. He also heard that the police units known as the Operations and Pursuit Groups had expelled Albanians from Kosovska Mitrovica. According to earlier evidence, those groups were under the command of Goran Radosavljevic Guri.

He reported this to General Dragoljub Ojdanic, Chief of VJ General Staff. General Ojdanic made a telephone call to the FRY president Slobodan Milosevic, in Vasiljevic’s presence. He told Milosevic that "a lot of things are done" in Kosovo; what he meant was that crimes were committed against Albanians.

On 16 May, Ojdanic and Vasiljevic attended a meeting with General Nebojsa Pavkovic who said that the Interior Ministry Headquarters in Pristina, under the command of General Sreten Lukic, "is blaming" the army for the killing of 800 Kosovo Albanians. Pavkovic, the witness testified, told him and Ojdanic that he had carried out an internal military investigation. He established that there were 326 bodies of Albanians in the areas under the police control and 271 bodies in the areas controlled by the military. High-ranking military officials reported everything they knew to Slobodan Milosevic on 17 May at the meeting attended by generals Ojdanic and Pavkovic, Geza Farkas, head of military intelligence service, Rade Markovic, head of police intelligence section, and Nikola Sainovic, Milosevic's person in charge of Kosovo. Vasiljevic recorded Milosevic's response to the crimes in Podujevo committed by the Scorpions in his notebook, admitted into evidence today. Milosevic referred to the Scorpions commander, Slobodan Medic, by his nickname Boca, saying he should be removed from the post. He ordered Rade Markovic to deal with the situation together with Vlajko Stojiljkovic, police minister, and Vlastimir Djordjevic, RJB head. “No heads will roll,” Milosevic added, because of the crimes that were committed.

Vasiljevic mentioned two other units that were causing problems, apart from the Scorpions: the Special Operations Unit and Arkan’s Tigers. Those units fought in Kosovo under the command of the Interior Ministry. All three units conscripted criminals who had previously committed a number of crimes in Croatia and Bosnia Herzegovina.