Josip Jovic, former editor-in-chief of the Slobodna Dalmacija daily, was tried today on contempt of court charges for publishing the transcript of the testimony by Stjepan Mesic. Mesic had testified in closed session at the Tihomir Blaskic trial. While the prosecution claims that Jovic “insolently defied” the court orders, the defense is trying to prove that the accused “was confused” 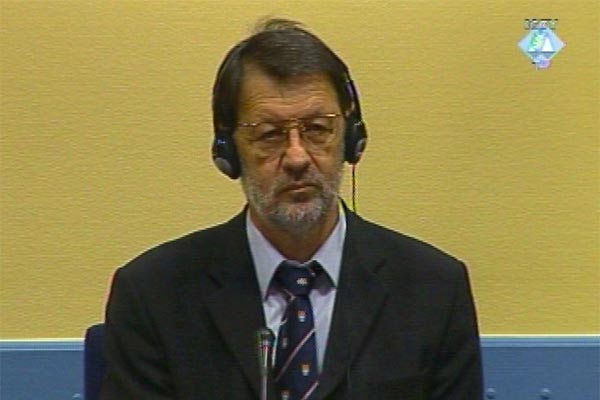 Josip Jovic in the courtroom
According to the prosecutor, the case of Josip Jovic, former editor-in-chief of the Slobodan Dalmacija daily, is “one of the clearest-cut but also the boldest cases of contempt of court”.

The simplicity of the case – at least as far as the prosecution is concerned – is reflected in the fact that it took less than ten minutes for the prosecutor David Ackerson to present his opening statement and all the evidence about how Jovic, as the editor-in-chief of the Split daily, defied two orders issued by the Tribunal over the period of 29 days in November and December 2000. The first is the order of the Trial Chamber from April 1998 to the effect that Stjepan Mesic would testify in closed session at the trial of Tihomir Blaskic. The second order of 1 December 2000 demands that Jovic and the Slobodna Dalmacija immediately cease further publication of Mesic’s statement and the transcript of his testimony.

Jovic’s “insolence”, the prosecutor says, is reflected in the fact that in all 29 issues of the Slobodna Dalmacija the headlines stressed that the daily was revealing “secrets from The Hague” and publishing the transcript of Mesic’s “secret testimony” before the ICTY, even though there was a risk of incurring the contempt of court charges. According to the prosecutor, this is “an obvious, premeditated and deliberate obstruction of justice”.

Jovic and his defense counsel Kresimir Krsnik tried to argue that the case was nowhere near as simple as the prosecutor tried to paint it. First of all, they said that the transcript of the session on which protective measures had been ordered for Mesic was posted on the ICTY public website. They went on to say that Mesic never tried to hide the fact that he had testified at the Blaskic trial, as confirmed by Chief Prosecutor Carla del Ponte in an interview to a Croatian newspaper.

Testifying in his defense, Jovic said that after he received a fax with the ICTY order of 1 December 2000, he was “misled” by contradictory legal interpretations and suggestions as to what he should do. He claims that the municipal public prosecutor in Split and the head of the Government Office for the Cooperation with the ICTY thought that the publication of the Mesic transcript did not break any Croatian laws and that this was not a problem for the ICTY to deal with. As Jovic and Krsnik said, many Croatian legal experts shared this view, as did the Croatian Journalists’ Association. Jovic was, as he said, “in a legal quandary”: is he, as a Croatian citizen, legally bound to comply with the orders issued by the ICTY directly to him, rather than through the competent authorities and agencies of his state.

Defense counsel Krsnik touched on this point in his closing argument, noting that the ICTY “cannot fax its orders directly to the citizens of Croatia” and criticizing the Croatian authorities for not reacting to the order issued to Jovic. Krsnik also criticized the prosecution for charging the journalists with the publication of the transcripts from the closed session, rather than “the person who took them from the courtroom”. This was an allusion to his Zagreb colleague, Anto Nobilo, who had represented General Blaskic.

Presiding Judge Robinson announced the judgment would be delivered soon.