JOKIC CHARGED WITH CONTEMPT OF COURT

Dragan Jokic, former engineer chief in the VRS Zvornik Brigade, sentenced to 9 years for aiding and abetting the crimes committed in Srebrenica, was charged today with contempt of court as he refused to testify at the trial of seven Bosnian Serb military and police officers. The seven are on trial for the genocide and other crimes in Srebrenica and Zepa 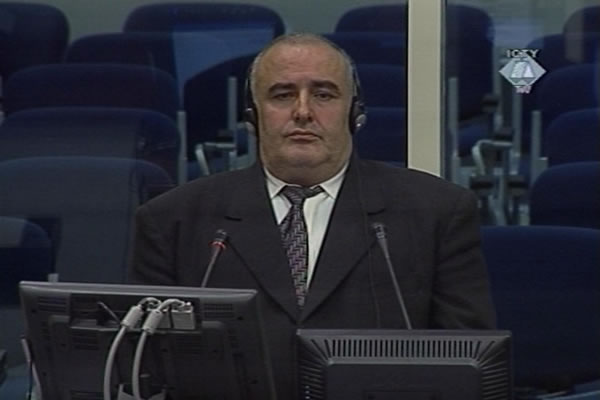 Dragan Jokic in the courtroom
Dragan Jokic, former engineer chief in the VRS Zvornik brigade, sentenced to 9 years for aiding and abetting murder, extermination and expulsion of Bosniaks from Srebrenica, was charged today with contempt of court after he refused to testify at the trial of seven Bosnian Serb military and police officers indicted for genocide and other crimes in Srebrenica and Zepa.

At the request of the prosecution, the Trial Chamber issued a subpoena to Jokic, summoning him to appear before the Tribunal and testify. He was granted full protective measures and was to testify in closed session. He was brought to the courtroom from the UN Detention Unit where he is awaiting transfer to a prison in a UN member state where he will serve his sentence. After he arrived, he said that he was mentally unable to testify and refused to read the solemn declaration obliging him to speak ‘truth and nothing but the truth’. The presiding judge told him that he faced contempt of court charges and ordered a 10-minute recess so Jokic could have his situation explained to him by Branislava Isailovic, who was appointed his defense counsel. To no avail: when he returned to the courtroom, Jokic said that he felt ‘unable’ to testify and was consequently formally charged with contempt of court. Judge Agius announced that the indictment would be drafted during the day.

[IMAGE]3053[/IMAGE]Dragan Jokic is the fourth witness charged with contempt of court for refusing to testify. The case against the protected witness K 12 who refused to testify at the trial of Slobodan Milosevic was suspended after the judges accepted his concern for his personal safety and that of the family should the fact of his testimony become known. Kosta Bulatovic, Milosevic’s defense witness, was sentenced to 4 months in prison, with a two-year parole for refusing to testify in the absence of the accused. Sefcet Kabasi, former KLA member, refused to testify at the trial of Ramus Haradinaj, Idriz Balaj and Lahi Brahimaj. The protective measures, he said, ‘apply only in the Tribunal’s courtroom’ and not in Kosovo. His case is still before the Trial Chamber.