MANOLIC UNDER CROSSFIRE FROM DEFENSE COUNSEL AND ACCUSED

Michael Karnavas, Prlic’s defense counsel, went furthest in his attempt to discredit Josip Manolic, testifying as a prosecution witness. He intimated that Manolic, as the person in charge of all the prisons in Croatia in the fifties was responsible for the alleged poisoning of Cardinal Stepinac 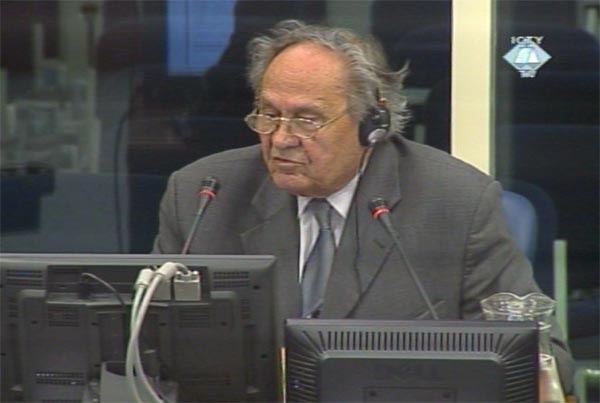 Josip Manolic testifying in the trial of the former leaders of Herzeg Bosnia
Despite his advanced age, over the past two days, Josip Manolic has been quite successful as he parried the advances of the six defense counsel and two accused in the fierce cross-examination in which they tried to challenge the main arguments in his testimony about the role and responsibility of President Tudjman and other Croatian officials in the events in BH in 1993. This was the time of the Croat-Muslim conflict in Western Herzegovina and Central Bosnia. In the indictment against the six former Herceg Bosna leaders: Jadranko Prlic, Bruno Stojic, Milivoj Petkovic, Slobodan Praljak, Valentin Coric and Berislav Pusic, their role and responsibility are defined as a joint criminal enterprise.

Michael Karnavas, Prlic’s defense counsel, went furthest in his attempt to discredit Josip Manolic, testifying as a prosecution witness. He intimated that Manolic, as the person in charge of all the prisons in Croatia in the fifties was responsible for the alleged poisoning of Cardinal Stepinac. Karnavas tried to paint Manolic’s disagreement with Tudjman, described in the examination-in-chief, as their “personal conflict” and Manolic’s reaction to the fact that the president had removed him from his advisor post and sent him to the Chamber of Counties in the Croatian Parliament. The other defense counsel also suggested that Manolic became critical of Tudjman and his BH policy only after he was removed from his post in the Parliament and expelled from the HDZ in March 1994.

The defense counsel for the six accused also tried to challenge Manolic’s evidence that after the famous Karadjordjevo meeting with Milosevic on 25 March 1991 Tudjman had told him that the two “in principle agreed about the division of BH”. They put it to Manolic that, if Tudjman had really said that, he had meant the division “within BH”, not of its external borders. Sticking by his previous statement, Manolic said that both Tudjman and Milosevic had set up commissions to work on delineation maps after the meeting in Karadjordjevo.

Clarifying the statement he had made yesterday about “dual policy”, Manolic today said that “Tudjman publicly recognized BH borders, but on the other hand he set up a working group with Milosevic which would draw lines to divide the area”.

After Josip Manolic ended his testimony, the prosecutor tendered into evidence the transcript of Stjepan Mesic’s testimony at the Tihomir Blaskic’s trial. Prlic’s defense counsel Karnavas strenuously objected on behalf of all the defense teams, demanding that Mesic be summoned to The Hague to give the defense an opportunity to “cross-examine him properly”, since now it has more relevant documents than were in the possession of Blaskic’s defense in 1997. The judges will rule on the prosecution motion and the defense objection later.