HERCEG BOSNA AS BANANA REPUBLIC IN THE BALKANS

The biggest mistake in Tudjman’s BH policy, Josip Manolic said as his testimony continued at the trial of the six former Bosnian Croat leaders, was the creation of the “state within the state” or “banana republic” in the Balkans 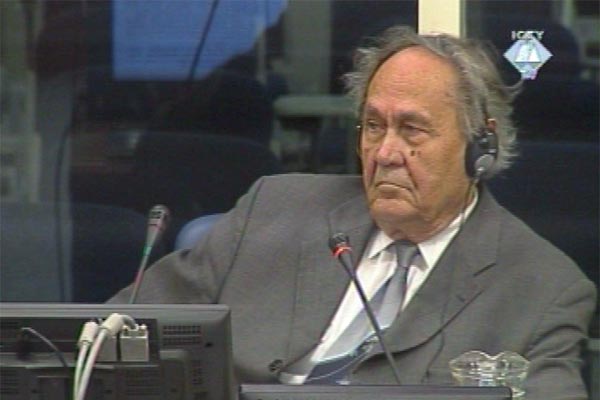 Josip Manolic, testifying in the trial of the former leaders of Herzeg Bosnia
The establishment of Herceg Bosna as a “state within the state” or a “banana republic” in the Balkans was the biggest mistake in Tudjman’s policy towards Bosnia and Herzegovina, in Josip Manolic’s opinion. As his evidence at the trial of the six former Herceg Bosna leaders continued, Manolic said that the “state within the state” not only brought into question the integrity of BH – both the Croats and the Muslims opted for an integral BH in the February 1992 referendum – but “tore apart the Croatian population in BH”. More than 150,000 Croats living in Posavina, Banja Luka, Sarajevo and other parts of BH remained outside the entity.

Manolic was the speaker of the Chamber of Counties in the Croatian Parliament and a member of the Supreme State Council. At the time, he was already openly opposed to this policy. At first, he tried to “spare” Tudjman and to “leave some space to maneuver” by putting all the blame for the mistaken Croatian policy towards BH on Gojko Susak, the then defense minister, and his Herzegovina lobby. However, when the president boasted publicly that “Susak is just implementing his BH policy, as a good minister should”, Manolic’s conflict with Tudjman was out in the open. In April 1994, the conflict ended with Manolic’s removal from the office of the speaker and his expulsion from the HDZ.

A large number of interviews Manolic gave to the Croatian media before and after his removal from office – later published in a book quoted by the prosecutor today – trace Manolic’s opposition to the “pernicious policy” pursued by the Croatian leadership towards BH. Manolic did not really say anything new today: he merely confirmed that the quotes read out by the prosecutor in fact represent his words, analyses and views.

Regardless of who actually fired the first shot in the Croat-Muslim conflict that broke out in late 1992 and early 1993, it is clear to Manolic why the conflict broke out. Behind all this is Tudjman’s ambition to annex Western Herzegovina to Croatia, thus making “the geographical croissant thicker”. Susak, Boban, Kordic and other persons Manolic singled out as the “architects and organizers of that almost suicidal war” misjudged the balance of powers in the area, counting that the Croat forces would easily defeat the Muslims. This did not happen and the longer the war went on, the Muslim side grew stronger, gaining superiority. As a result, as Manolic said today, Tudjman and Susak “started trying to figure out how to help the HVO avoid a military disaster, at the same time avoiding the conflict with the international community”.

According to Manolic, this was done in three ways: mobilizing people of BH origin who lived in Croatia, sending special units to reinforce the HVO forces and deploying the HV (Croatian Army) units in BH. As regards the third mode of assistance to Bosnian Croats, Manolic quoted the Security Council resolutions from 1993, threatening Croatia with sanctions if their forces continued their involvement in the BH conflict. Because “thousands of intelligence officers were active” in the area, Manolic said, the Security Council “must have had ample evidence to support this conclusion”.

According to Manolic, the Croat-Muslim conflict cost the Republic of Croatia 3 million German marks a day: a total of about a billion marks for the year it lasted.

When asked by the prosecutor whether Zagreb knew about the concentration camps in Herceg Bosna, Manolic replied that “rank-and-file spies knew it, so Gojko Susak had to know it”. According to him, no one in Croatia has yet gotten an answer to the questions, “who took the political decision to establish the concentration camps, to besiege Mostar, to destroy the Old Bridge and to start the war with the Muslims”. That is why, Manolic concluded, “this Tribunal will have to find answers to those questions”.