At the beginning of his testimony at the trial of former Bosnian Croat leaders, Josip Manolic said he parted ways with former Croatian president Tudjman because of his BH policy. As his testimony continues, he described as “nothing but empty talk and expression of various wishes” Tudjman’s obsession with the restoration of the Croatian Banovina and with the “realistic borders” meant to “make the Croatian croissant thicker” 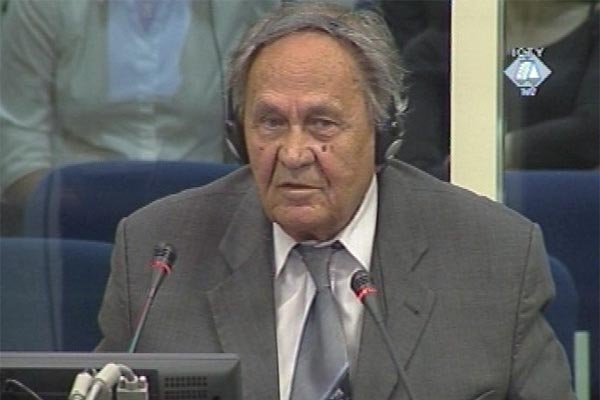 Josip Manolic, testifying in the trial of the former leaders of Herzeg Bosnia
At the beginning of the trial of the six former Herceg Bosna leaders, Josip Manolic said he had parted ways with President Tudjman and the Croatian Democratic Union (HDZ) in April 1994 because he disagreed with Tudjman’s BH policy, failure of rule of law and his authoritarian leadership style in the party. Manolic is a former high-ranking official in the Republic of Croatia, one of the founders of the HDZ.

The disagreements appeared, as 86-year old Manolic testified, after the secret meeting between Tudjman and Milosevic in Karadjordjevo on 25 March 1991. The meeting was to be attended by Stjepan Mesic and Borisav Jovic, but the two presidents decided to talk in private, without any witnesses. After the meeting, Tudjman, visibly pleased, told Manolic and Mesic that he and Milosevic “have in principle agreed about the issue of the division of BH”. Manolic disagreed with this because he thought, as he testified today, that the “AVNOJ borders” had to be accepted by all and that “it is unrealistic and unwise to meddle with them”.

Manolic’s version of the Karadjordjevo tallies with the one presented by Stjepan Mesic in his testimony at the Slobodan Milosevic trial. As his evidence continued, however, Manolic tried to play down Tudjman’s views of BH. Although he did confirm that for a time Tudjman had been “obsessed” with the Croatian Banovina and the restoration of its borders, considering the “AVNOJ borders” to be “absurd”, saying that “the Croatian croissant needed to be made thicker”, Manolic dismissed all that as “pure empty talk and expression of his own views” or “various wishes”. When the prosecutor asked him how the “Croatian croissant could be made thicker”, Manolic admitted that “it probably involved certain shifts of the border with BH”, adding that “no one ever explicitly said that”.

According to Manolic, the key moment happened in February 1992, when Tudjman opted for “the preservation of BH as a whole” by deciding that the Bosnian Croats should participate in the referendum on sovereign BH, which was contrary to his deal with Milosevic.

Josip Manolic’s testimony will continue until the end of this week.