"EXERCISE IN HUMILIATION" IN DRETELJ

As Ed Vulliamy testified, the condition of the detainees in Dretelj when he visited the camp near Capljina in September 1993 was the result "of extreme neglect in terms of food, dehydration and hygiene…" There were civilians, but also former HVO members, among the detainees. Those Muslims, the witness said, "had fought in the organization which now kept them in detention" 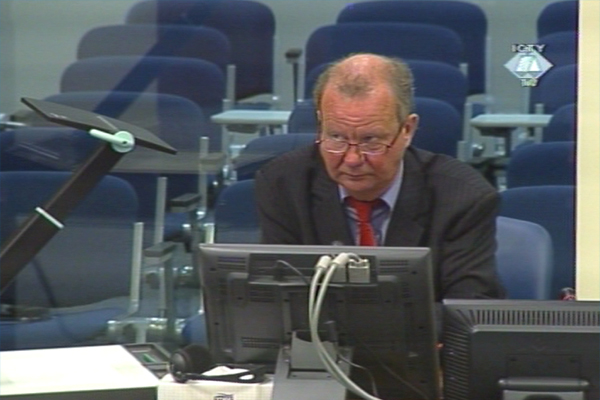 Edward Vulliamy, witness at the Milomir Stakic trial
In September 1993, the camps in the territory of the so-called Herceg Bosna became "a diplomatic, rather than just a humanitarian problem", British reporter Ed Vulliamy said as he continued his testimony at the trial of the six former Bosnian Croat leaders. Croatia was under diplomatic pressure and was threatened with sanctions. President Tudjman then wrote an open letter to the first man in Herceg Bosna, Mate Boban, with an appeal to bring the living conditions in the camps in line with international law and the Geneva Conventions.

After Tudjman's letter was published, Vulliamy and a few other Western reporters asked the HVO permission to visit Dretelj. They were refused several times. Finally, Slobodan Praljak, now an accused in this case, signed an authorization for them to go to Dretelj. The people there were caught by surprise, but after a brief hesitation, camp commander Sakota took them around the camp. They were escorted by camp guards. As Sakota told them, there were 1,400 prisoners in the camp at the time.

They started their tour in the camp infirmary, where they found 20 to 25 men. Vulliamy describes them as "malnourished and in a serious condition. They all had skin problems". They went to the building where Vulliamy had seen female detainees in 1992. Now it was full of men, sitting, kneeling or squatting down on the floor. He estimates there were "several hundred of them, maybe 500". The prisoners told them the situation had been much worse in July, when the door had been closed for 72 hours. They had been suffocating in the heat and stench and had been drinking their own urine.

They were then taken to two tunnels, dug into the hill. The doors were open, but it was dark inside. The prisoners there were also in a very bad state, pale, their eyes unfocused, with skin problems. He didn’t see any evidence of beatings, but they told him that some people had been killed and that they too had been locked up for 72 hours in July. They told him that one night drunken guards had opened fire through the metal door of the tunnel, killing or wounding several prisoners. Vulliamy saw bullet holes in the door and impacts on the rear wall of the tunnel. The prisoners also told him that 120 men who were in the worst condition had been taken out of the camp on the eve of the visit by the International Red Cross. The prisoners' condition in Dretelj, Vulliamy claims, was the consequence "of extreme neglect in terms of food, dehydration and hygiene". The way in which the prisoners were taken to lunch was described by Vulliamy as "an exercise in humiliation". He was able to see this during his visit. There were civilians among the prisoners, but there were also former HVO members, Muslims. As the witness said, "they had fought in the organization that now kept them in detention."

The British reporter described in detail his last two visits to Mostar in September 1993 and February 1994. The eastern part of the town had already suffered a lot of destruction and had been under siege in the fall of 1993. By next February, it was in an even worse state. There were more refugees in it, the snipers terrorized the population to such an extent that people made alternative "corridors", connecting ground-floor apartments in several buildings to reach some parts of the town. "We had a feeling that those people were on the verge of madness", Vulliamy said.

The British reporter's testimony will continue with the cross-examination by the defense counsel for the six accused.