Momcilo Krajisnik's defense witnesses persistently claim that they heard of the key SDS documents from 1991 and 1992 only when they arrived in The Hague to testify. The prosecution is using those documents to prove the existence of a plan for the takeover of power in some municipalities in BH and the separation from other peoples 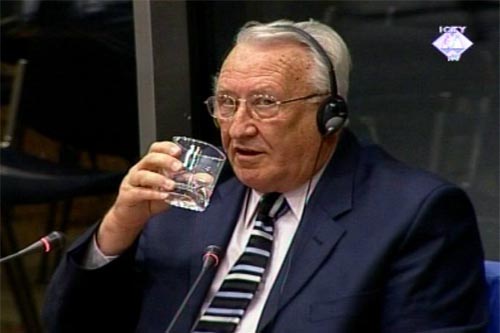 Momčilo Micic, defense witness for Krajisnik
The first "opposition" witness after a series of ten former and current SDS members to testify in Momcilo Krajisnik's defense presents the policy pursued by the Bosnian Serb leadership in 1991 and 1992 as "immature and pointless". This supports the defense efforts to prove that there was no plan at the SDS top to take over power in parts of BH. Before the war, Momcilo Micic was a member of parliament from the Alliance of Reformist Forces, the party of the former Yugoslav prime minister Ante Markovic. In the summer of 1991, he left the party only to enter the Bosnian Serb Assembly a few months later as one of the nine deputies there who were not from the SDS ranks.

Like all Krajisnik's defense witnesses before him, Micic claims that until his arrival in The Hague, he had never heard about the key SDS documents used in the indictment to prove the existence of a plan for the take-over of power in some municipalities and the separation of Serbs from the other peoples. Versions A and B and the Six Strategic Objectives were never mentioned at the Assembly sessions he attended, he claims now.

Describing a meeting that took place in early 1992 he and the then commander of the JNA Tuzla Corps had with Radovan Karadzic, on their initiative, Micic says it was clear that Karadzic "did not have an accurate picture of the situation in BH" and that there was "no project of what had to be done".

In the cross-examination, prosecutor Alan Tieger confronted the witness with the minutes from the sessions of the Bosnian Serb assemblies attended by Micic, where Ratko Mladic, Radovan Karadzic and Momcilo Krajisnik spoke in detail on several occasions about the Six Strategic Objectives, adopted by the Assembly on 12 May 1992. Micic maintained, however, that he had seen the document for the first time "two days ago". He labeled Ratko Mladic's speech before the Assembly about "the strategic objectives that have been realized" as "the general's bragging". As for the words of Radovan Karadzic and Momcilo Krajisnik, he said those were "just ordinary speeches" he never took to refer to any specific documents.

“Mr. Micic, you have not been frank. You knew both when the document had been adopted and what was in it," the prosecutor told the witness, reminding him that the document defined the Bosnian Serbs' objectives as the separation of Bosnian Serb territories from the other peoples, the creation of a single state of the Serb people without the border on the Drina, the division of Sarajevo and access to the sea. "I really have nothing to hide," Micic said, repeating that he was not aware the assembly had adopted the document.

The prosecutor corroborated his claim about the witness's lack of frankness by a recording of a TV broadcast from the Pale TV in February 1995, showing Micic, among others. The former chairman of the SDS Deputies' Club reminds him, in an altercation, about the strategic objectives and the date when they were adopted by the Assembly. Although it was obvious the witness knew what he was talking about in 1995, he tried to persuade the Chamber his previous claims had been accurate. "I used the term "strategic objectives" figuratively, just as Mr. Maksimovic's speech was figurative," Micic said at the end, quite unconvincingly.