On the sixth day of his testimony, Momcilo Krajisnik claims that the war-mongering statements made by SDS deputies and Karadzic’s declaration of a party-wide state of emergency did not mean that Serbs were preparing for war. Those speeches and moves were just “marketing efforts”, he says 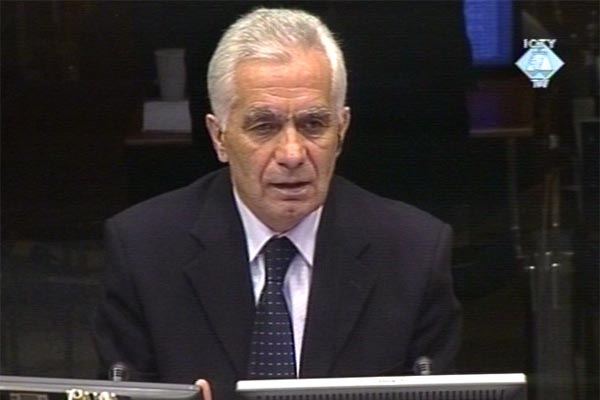 Momcilo Krajisnik testiyfing in his own defense
As his testimony continued, Momcilo Krajisnik confirmed today that on 18 October 1991 Radovan Karadzic had declared a party-wide state of emergency in the SDS at a meeting of the SDS deputies’ club. The accused, testifying in his own defense, labeled this as “marketing”, saying it had been forced by the radical calls to arms by some deputies. The only result of the state of emergency Karadzic declared, he says, was the introduction of “duty rosters” in some municipal boards. This is how Krajisnik tried to support the argument that the SDS had not been preparing for war – an argument repeated by the defense throughout its case.

Momcilo Krajisnik’s testimony today again consisted of quotes from various speeches made by SDS deputies and high-ranking officials at the sessions of the Assembly of the Serbian People in BH and other Bosnian Serb bodies, with Krajisnik commenting and interpreting those statements. The defense counsel are mostly highlighting views detrimental to the SDS leadership in order to give the accused an opportunity to respond to the prosecutor’s allegations, anticipating any questions the prosecutor might ask. The examination-in-chief thus at times begins to resemble cross-examination.

For instance, today, the defense counsel took Krajisnik’s claim that the Serbs were not preparing for war and that the SDS did not want war at all, and then checked it by quoting speeches made by several deputies who claimed in October 1991 that the Serb side was ready to go to war, that it should take initiative and fight for a “greater Serbia”. He called those statements “marketing efforts”, adding that to say “we are ready to go to war” was not the same as to say “we want war”.

Unlike the defense witnesses who claimed that they had not seen the document known as Variants A and B before arriving in The Hague, Krajisnik claims he doesn’t know whether he saw the document at all. He considers it to be irrelevant at any rate because it was never discussed at any major meetings in the SDS.

He refused to either confirm or deny the prosecution allegations that the document had been distributed to the Bosnian Serb Assembly on 21 December 1991. This document contains instructions to the local authorities for the takeover of power in the municipalities in the parts of BH envisaged as Serb areas.

Krajisnik went as far as to conduct a small-scale enquiry into the origins of the document. When he arrived in Scheveningen in 2000, he asked his lawyer to write to Radovan Karadzic and to ask him what he knew about it. Karadzic allegedly responded that the paper had been drafted by “some old military officers, concerned because of the genocide against Serbs in the Second World War”. Milovan Bjelica, another defense witness, made a similar claim.