LUNCH, INSTEAD OF INSTRUCTIONS

Testifying as Krajisnik's defense, Slobodanka Hrvacanin tries to challenge claims made by some prosecution witnesses that the document – made in two versions, A and B – with the plan for the take-over of power in BH municipalities was distributed at a session of the SDS Main Board. She claims all the SDS members present there were in a hurry to have lunch. There was no time, therefore, to distribute the document 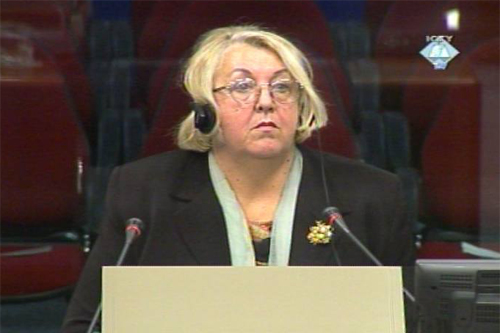 Slobodanka Hrvacanin, defense witness for Krajisnik
All the former members of SDS municipal bodies testifying as Momcilo Krajisnik's defense witnesses have so far claimed that they had never seen the document entitled the Instruction on the Organization of the Serbian People in BH in Emergency Situations. Slobodanka Hrvacanin, former president of the SDS in Zenica and a member of the SDS Main Board claimed the same, contradicting claims made by some prosecution witnesses.

Former SDS officials Miroslav Deronjic and Radoslav Neskovic, called as witnesses by the prosecution, claimed the Instructions had been distributed to the persons present at the extended session of the Main Board in Sarajevo on 19 December
1991. Witness Hrvacanin denied this today.

As she said, she was "not sure that Deronjic was at the session at all", and as for Neskovic's claim that the SDS members went to the platform one by one to get a copy of the document, it cannot be true. "There were 200 of us at the meeting, which means that such a procedure would have taken about 200 minutes. The meeting did not last more than two hours, because all those present were in a hurry to go for lunch," she said. She also claimed that no SDS Crisis Staff had been established during the war in Zenica, where Serbs were in the minority (15%).

Momcilo Krajisnik's defense has been trying to prove from the beginning of its case that the Bosnian Muslims were responsible for the outbreak of the war, in order to challenge the allegations in the indictment that the SDS leadership had a plan in place almost one year before the war to "permanently remove the Bosnian Muslims and Croats, by force or other means, from large areas in Bosnia and Herzegovina". In support of this claim, the witness claimed that as the president of the municipal SDS in Zenica she was "verbally and physically abused by Muslims" and had to flee to Banja Luka in March 1992.