CHAIN OF COMMAND AND CHAIN OF CARE

Orders and other military documents tendered into evidence by Milosevic in the course of General Krsman Jelic's testimony are, in Milosevic's opinion, "cumulative evidence that everything was done during the conflict in Kosovo to prevent crimes and protect the civilian population". Judge Robinson notes that Milosevic and his witnesses are "obsessed by formalism" 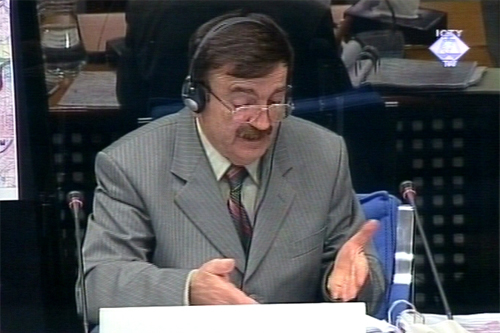 Krsman Jelic, defense witness for Milosevic
"The chain of command is equal to the chain of care of the civilian population," Slobodan Milosevic said today as he examined retired general Krsman Jelic. At the time relevant for the Kosovo indictment, Jelic commanded the 243rd Mechanized Brigade of the VJ. Orders, combat reports and other military documents tendered into evidence by Milosevic in the course of General Krsman Jelic's testimony are, in Milosevic's opinion, "cumulative evidence that everything was done during the conflict in Kosovo to prevent crimes and protect the civilian population"

The military documents whose parts General Jelic read out in court today indicate that all the VJ units and personnel deployed in Kosovo were under strict orders, reiterated several times, to comply with the standards of the international law of war and the Geneva Conventions, to treat the prisoners and the wounded humanely and to take care of the welfare and safety of the civilian population. According to General Jelic, in 1999 in Kosovo the military had orders to "provide safe passage to the civilian population leaving their homes because of the NATO air strikes and the actions launched by the Siptar terrorist forces". The troops neither forced the people out nor prevented them from leaving, the witness claims. They merely directed them to take the safest routes.

Noting that both the accused and his witnesses were "obsessed with formalism", Judge Robinson told Milosevic at one point that "it doesn’t matter what was written in the orders, but what was really happening". Milosevic disagreed, claiming that "orders are important" because the prosecutor charged him on the basis of his command responsibility: for failure to prevent or punish the unlawful conduct of the forces subordinate to him.

Milosevic devoted a part of the examination of his defense witness to the events alleged to have happened in the first half of 1999 in the parts of Kosovo where units under General Jelic's command were deployed. He quoted from the indictment and from the testimony of prosecution witnesses parts that concerned the attacks on villages, expulsion of civilians, destruction and plunder of houses and killings of Kosovo Albanians in the villages of Kotlina, Slatina, Stagovo and in other locations in the municipalities of Kacanik and Urosevac. General Jelic explained that his units were deployed "in the areas of those villages, not in the villages themselves", and that there was no need for the troops to enter because, as he said, "what would the troops and tanks be doing around the houses". He claims he did not hear about any murders in those villages, but he knows that terrorists – KLA members – got killed in clashes with his forces. He denies that soldiers from his units expelled civilians from the villages or that they separated men from women and children, as alleged in the indictment. "We never separated people on the basis of their sex or ethnic background," the witness said.

Milosevic used General Jelic's testimony to stress once again the "collusion between NATO and terrorists", because the reports originating from the 243rd Brigade speak about "coordinated attacks" of the NATO planes from the air and KLA attacks on the ground. The fact that the complete files of the 243rd Brigade were found in the village of Raka, with quite specific information about the quantities and types of weapons proves, according to Milosevic and his witness, "the links between NATO, KLA and OSCE", as those are the data gathered by the Kosovo Verification Mission, which monitored the compliance with the agreement on the number and disposition of troops in Kosovo.

General Krsman Jelic will be cross-examined tomorrow by prosecutor Nice.