Although the accused and prosecutor presented contrary arguments and views of the causes to the present situation, they both opposed the judges' idea to sever the Kosovo case and then to continue trial on the indictments for Croatia and Bosnia and Herzegovina 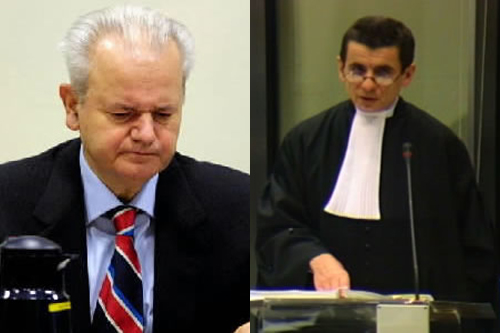 Slobodan Milosevic and Geoffrey Nice
The accused Slobodan Milosevic and prosecutor Geoffrey Nice today jointly opposed the judges' intention to sever the Kosovo case. The judges would thus end the trial and render their judgment on the Kosovo indictment and then continue hearing defense evidence on the Croatia and Bosnia and Herzegovina indictment. Although they joined forces on that, the arguments and views on the causes of the present situation at trial were contrary.

According to the prosecutor, it is "completely unacceptable for a large complicated trial to be replaced by two large complicated trials". As he opposed the severance, the prosecutor also opposed the allotment of more time to the accused for his case, and any further delays caused by the ill health of the accused. According to the calculation presented by Nice, the prosecution took seven weeks to present its case on each of the indictments – a total of 21 weeks. He claims this is "a relatively short time bearing in mind the scope of the case". Noting that the current situation is the result of the way in which the accused used the time allotted to him, deciding to devote three quarters of the time to contesting the evidence on the Kosovo indictment, the prosecutor adds that Milosevic may be manipulating his health state. Nice contends that "this is apparently an ostensible illness".

Severing the Kosovo indictment and putting an end to that part of the trial would "save only a few weeks", Nice claims. In that case, the Kosovo trial would end in early March, rather that towards the end of the month, which is the deadline for the completions of the defense case on all three cases, according to the current schedule. Stating that the prosecution has "a duty towards the victims to continue the trial," Nice added that "it would be unjust to give up on the judgments for Croatia and BH" just to save a few weeks of trial time.

In late 2001, Milosevic opposed the prosecution motion for the joinder of cases. Today, he opposed the initiative to sever the cases after four years of trial on all three indictments. Milosevic blamed his health problems on the prosecution and its "megalomaniac approach", as he said several times. According to him, the prosecution is trying "to make up for lack of evidence with the quantity of material". This, he says, is "a form of torture". According to Milosevic, it is "cynical" to shift the blame for the current situation on him who is "the first victim of the bombardment with documents and witnesses" and on his health, which is the "consequence of the torture".

Opposing the initiative to sever the cases, Milosevic called for his "right to health to be restored" and to allow him to rest, as the Russian, French and Serbian doctors recommended, after examining him in early November. The Dutch doctors who examined him in the meantime, on the orders of the Chamber, concurred with their opinion.

The common ground in the joint enterprise by Milosevic and Nice today was their insistence on how the severance idea is perceived in the Serbian public. The prosecutor first tried to warn the Chamber about "problematic and unpleasant comments" about the "real motives and objectives of the severance". Judge Bonomy interrupted him brusquely, labeling his arguments "unbelievable and pointless".

This did not prevent Milosevic from pointing to the "coincidence": the Chamber is in a hurry to judge him on the Kosovo indictment just as the talks on the future status of Kosovo are about to begin. "Your masters," Milosevic told the judges, "bear in mind the fact that the FRY and Serbian forces charged with the crimes in Kosovo should be judges so that they can implement their geo-political goals".

Judge Bonomy wanted to know how was he, for instance, receiving orders from his masters. Milosevic replied in his familiar way, by launching a tirade on the conspiracy for the destruction of Yugoslavia. He went on to accuse the judge that he was serving those who committed that crime and that he was being paid to do it. The judge then asked Milosevic if he claimed the judge was not being paid by the UN. He had to wait until the end of the break to get his answer. The accused explained to him that the Tribunal was financed "from obscure sources, such as Soros, Islamic foundations and NATO" and invited Bonomy to "think about it, as a conscientious man".

After hearing him out, Judge Bonomy admitted he had "no idea" what the accused was talking about and that the more he read from the transcript what the accused has said, the less he understood it".