After the accused failed to appear in courtroom this morning, the presiding judge announced the Trial Chamber would be making the decision about how and when the trial would proceed after it received and studied the report from the Detention Unit doctor and the expert reports by the Dutch cardiologist and ear-nose-throat specialist treating Milosevic 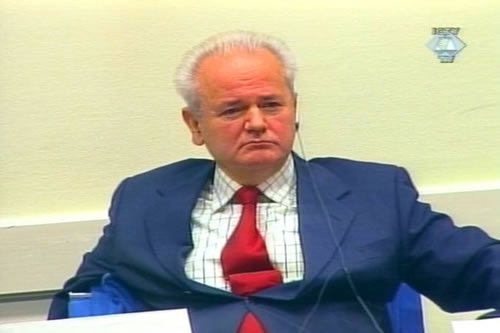 Slobodan Miloševic in the courtroom
Slobodan Milosevic failed to appear in courtroom this morning, as Presiding Judge Robinson notified the parties, without mentioning any details about the nature of the accused's illness.

The Trial Chamber would be making the decision about how and when the trial would proceed after it received and studied the report from the Detention Unit doctor and the expert reports by the Dutch cardiologist and ear-nose-throat specialist treating Milosevic. The experts were asked last week to provide their opinion on the findings presented by the Russian, French and Serbian doctors who recommended that the accused cease "all physical and mental activities in the period of at least six weeks".

Prosecutor Nice tried to plead "common sense", urging the Chamber to consider "alternative ways to continue the trial". Noting that the witness – who has been waiting days to be called – would be testifying about specific events and crimes, rather than about the acts by the accused, Nice urged the Chamber to order the assigned counsel to contact the witness and proof him in anticipation of possible questioning. As Nice said, "there may come a time when Mr. Kay or Ms. Higgins will be examining the witness".

The judges decided that "it would not be appropriate, at least not at this moment", repeating that they would make the decision after they received and studied the three medical reports.

The prosecutor obviously believes the time has come for the decision of the Appeals Chamber, rendered on 1 November 2004, to be implemented. The decision reaffirmed the assignment of counsel to Milosevic, at the same time restoring his right to represent himself in court – as long as his health allows it. The decision further states that the presence of assigned counsel in courtroom would make it possible, if Milosevic's health were to deteriorate, to continue the trial even if the accused were temporarily unfit to participate. The Trial Chamber was given the power to decide when this would be the case.

The Trial Chamber is expected to issue its order on when and how the trial is to proceed later this afternoon.