The accused was not able to call his next witness because he was feeling "a huge pressure in his eyes and ears" and because his "head weighs half a ton". After Milosevic was subjected to an urgent medical examination, the trial was adjourned until Monday, 21 November 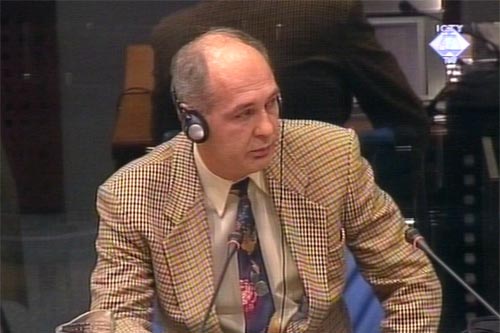 Zlatko Odak, defense witness for Milosevic
As Zlatko Odak completed his testimony, Slobodan Milosevic said he was unable to call his next witness because he was feeling "a huge pressure in his eyes and ears" and because his "head weighs half a ton". He added he was unable to sit there anymore and that he was opposed to the trial continuing in his absence.

The judges ordered that the accused be examined immediately by the Tribunal's doctor and adjourned the trial until they received his report. After an hour's break, Judge Robinson announced that in view of the doctor's report the Chamber did not consider it appropriate to continue the trial today and tomorrow. The trial was thus adjourned until Monday, 21 November.

Before the adjournment, prosecutor Nice had just completed his cross-examination of Zlatko Odak, lieutenant-colonel in the SaM Army. At the time relevant for the Kosovo indictment, he commanded a logistics battalion in Djakovica. The prosecutor read out parts of the OSCE book As Seen, As Told pertaining to the events in Djakovica after the NATO air strikes began. Those passages describe the burning of houses, looting of shops, the fire in the old bazaar, the expulsion of people… Odak, who was in Djakovica at the time, claims he did not see any of those incidents, or, if he did, he claims those were the consequence of NATO strikes or "individual cases of criminal activity, such as there are in any war".

Odak used the same tactics to challenge the allegations made in the report by Andras Riedlmayer, an expert for Ottoman cultural heritage in the Balkans, who researched and documented the damage to places of worship and cultural heritage in Kosovo in 1998 and 1999. According to his report, presented at the Milosevic trial in April 2002, of more than a hundred of Islamic, Orthodox and Roman Catholic places of worship destroyed or damaged in 1998 and 1999, only two were partially damaged from the air, while the rest sustained damage from the ground: by shells, explosives or arson. Odak claims this is not true for Djakovica. As he said, it is "specific", because of its narrow streets and crowded housing. When one building was set on fire by NATO bombs, the fire spread rapidly to the surrounding houses and engulfed large areas.

As the witness ruled out several times the possibility that apart from his unit, there were any other military, paramilitary or police units in Djakovica, that may have committed the crimes alleged in the indictment, the prosecutor completed the cross-examination by stating that Odak and his troops were responsible for all those crimes. He added that Odak and other VJ commanders who testified in The Hague as Milosevic's defense witnesses did so in order to lie and to hide their own responsibility. The witness disagreed with the statement.