ICTY makes public Judge Bonomy's opinion dissenting from the majority decision of the Trial Chamber ordering the Dutch physicians treating Slobodan Milosevic to submit an expert report on the findings and recommendations of the Russian, French and Serbian doctors who examined the accused on 4 November 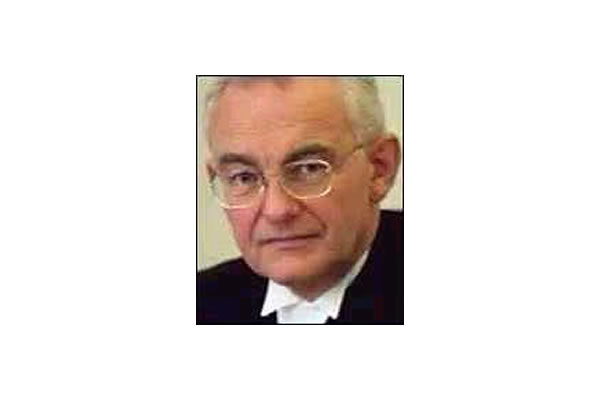 Iain Bonomy, judge at the Slobodan Milosevic trial
"It is not for the Trial Chamber to divine the wishes of the accused from his cryptic statements," Judge Bonomy states in his dissenting opinion appended to the majority decision of the Trial Chamber ordering the Dutch physicians treating Slobodan Milosevic to submit an expert report on the findings and recommendations of the Russian, French and Serbian doctors who examined the accused on 4 November.

Judge Bonomy labeled "cryptic" Milosevic's statement during the 14 November hearing, that he was "not asking anything else from the Chamber but not to disregard the doctors' recommendations". This, according to Bonomy, can refer to different things, such as the adjournment of the trial, further medical tests or something else. In the context of this case, already suffering from problems caused by the ill health of the accused, Judge Bonomy thinks that it would be appropriate for the accused to submit a written motion to the Chamber identifying what it is he is asking for. This, Bonomy believes, "would insure that the interests of the accused, interests of justice and the public interest in a fair and expeditious trial would not be prejudiced in any way by confusion, misunderstanding or uncertainty".

Noting that there are certain discrepancies between the findings of the Russian, French and Serbian doctors and the report of the Dutch doctors actually treating Milosevic, as regards the nature of the hearing problems of the accused and their link to his cardio-vascular problems, Judge Bonomy notes that the Serbian doctor, ear-nose-throat specialist Vukasin Andric was "an important defense witness about a number of matters in Kosovo ". According to Judge Bonomy, "before his testimony is evaluated", the Trial Chamber should not be put in a position to evaluate his credibility "in a context that has nothing to do with this testimony".

That is why Judge Bonomy thinks the accused should be advised to submit a motion – if he wants the Trial Chamber to do anything – clearly stating what he wants and submitting opinions of experts not involved in the trial.