KRAJISNIK – MAN WITHOUT ANY INFLUENCE, MEMBER OF AN "INSIGNIFICANT BODY"

Former Republika Srpska prime minister and head of the Banja Luka town hall, Rajko Kasagic claims the accused Krajisnik had no influence over the state authorities and the only punishment he could inflict was "to take away the floor from the deputies in the Assembly" 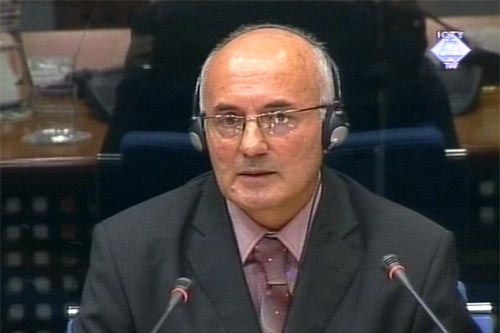 Rajko Kasagic, witness in the Krajisnik trial
“Momcilo Krajisnik did not have the power to punish anyone. The only sanction at his disposal during the war was to take away the floor from the deputies at Assembly sessions," claims defense witness Rajko Kasagic. At the time relevant for the indictment against Krajisnik, Kasagic was at the head of the town hall in Banja Luka. He went on to become the prime minister of Republika Srpska. He confirmed that he had known about the evictions of Croats and Muslims from their homes during the war. He had no knowledge of who was doing that and could not prevent or punish the perpetrators because it was not his "job" at the time.

In an attempt to contest the allegations in the indictment that Krajisnik, "as a member of the Expanded Presidency had de jure control and authority over the Bosnian Serb Forces", the witness called the body an "advisory body no one paid any heed to". He even said he could not remember whether Krajisnik had been a member of the "insignificant body".

As many other defense witnesses before him, Kasagic claims he saw the plan for the take-over of power in BH municipalities, the notorious version A and B document, for the first time in The Hague, on the eve of his testimony. "If I had heard of this document during the war, it did not have any practical effect," he said.

During the examination-in-chief, the defense did not ask Kasagic a single question about the eight detention facilities that existed in Banja Luka in 1992, as alleged in the indictment. The defense didn’t ask anything about the killings in the Manjaca camp – Krajisnik is charged with those too.

Because of the changes in the witness schedule, the prosecution asked to be given one more day to prepare for the cross-examination of Rajko Kasagic. The defense will thus call another witness this afternoon. Kasagic will return to the witness stand on Friday.